In the 36th over of the innings, West Indies skipper Nicholas Pooran took a one-handed stunner to dismiss Shreyas Iyer 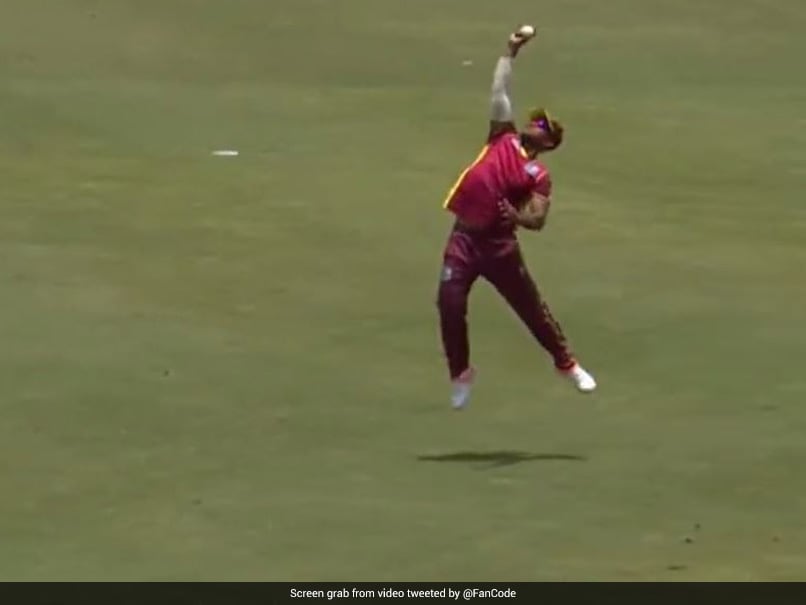 Nicholas Pooran taking a stunner during the first ODI© Twitter

India's top-order comprising Shikhar Dhawan, Shubman Gill and Shreyas Iyer was in sublime form and they made the most of below-par West Indies' bowling and all three batters registered half-centuries in the first ODI of the three-match series. However, West Indies were brilliant in the field and skipper Nicholas Pooran came up with a stunning catch to cut short Shreyas Iyer's stint at the crease and the batter walked back after scoring 54.

It was on the fifth ball of the 36th over bowled by Motie that Pooran took a one-handed stunning catch. Iyer made room for himself and tried to play an inside-out shot, but he was unable to get enough elevation. Pooran jumped and the ball stuck in his right hand. As a result, Iyer had to walk back to the hut.

.@ShreyasIyer15 is gone, caught by @nicholas_47. So disappointing, his scuffed shot.

In the match between India and West Indies, the latter won the toss and opted to bowl. Shikhar Dhawan and Shubman Gill put on 119 runs for the opening wicket. However, after Iyer's dismissal, India lost wickets in a cluster and in the end, they had to settle with a score of 308/7 in 50 overs. India ultimately won the match by three runs.

The West Indies needed 15 off the final over for a record chase at Queens Park Oval but Mohammed Siraj was able to stop a rampaging Romario Shepherd (38 not out off 25).

West Indies Cricket Team West Indies vs India, 2022 Cricket
Get the latest updates on Fifa Worldcup 2022 and check out  Fifa World Cup Schedule, Stats and Live Cricket Score. Like us on Facebook or follow us on Twitter for more sports updates. You can also download the NDTV Cricket app for Android or iOS.