The BCCI on Wednesday posted a teaser on Twitter of the "special interaction" between Virat Kohli and Vivian Richards. 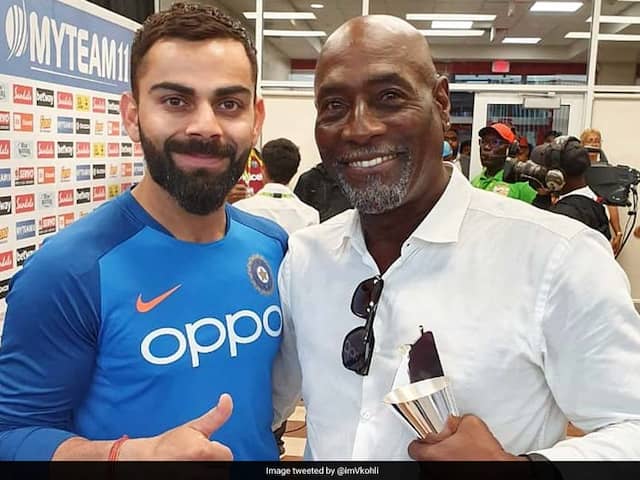 Virat Kohli has time and again expressed his fondness of the West Indies great Vivian Richards. Kohli, who is one of the greatest batsmen of the current generation, has drawn comparisons with the West Indies great for his attacking style of play. Not just others but Richards himself has heaped praise on the Indian skipper many a times. The Board of Control for Cricket in India (BCCI) on Wednesday posted a 15-second teaser of the "special interaction" between Kohli and Richards on Twitter.

"We have a very special interaction lined up tomorrow ft. King of Antigua, Sir @ivivianrichards and our very own #KingKohli @imVkohli. Stay tuned for the full interview on http://BCCI.TV #WIvIND," BCCI tweeted.

We have a very special interaction lined up tomorrow ft. King of Antigua, Sir @ivivianrichards and our very own #KingKohli @imVkohli. Stay tuned for the full interview on https://t.co/Z3MPyesSeZ #WIvIND pic.twitter.com/rMJn2a7Saa

The teaser, without featuring the two man, did raise fans' expectation by giving them a glimpse of the preparations, including the setting of cameras by the crew members. Although the video didn't reveal much about the interaction, it certainly succeeded in increasing fans' anticipation.

Earlier, Kohli had shared a picture with the Windies legend Richards on his Twitter with the caption: "With the biggest BOSS!".

Not just Kohli, the Team India head coach Ravi Shastri is also a huge admirer of the former great. Shastri on the eve of the first Test against the West Indies went one step ahead and termed him the King of Antigua.

Ravi Shastri took to Twitter and shared a picture. He wrote, "With My Maan. The King in his Kingdom. Antigua. @ivivianrichards #WIvIND."

Richards, 67, is one of the best players to have stepped out on the field. He was the vital cog in the Windies' invincible line-up during the 1980s. Richards scored 8,540 runs in 121 Test matches and managed to register 6,721 runs in the ODI format at an average of 47.

Earlier this year, calling Kohli "absolutely special", Shastri had said that the Indian run-machine is the closest he is seen to the great Viv Richards.

India's tour of the West Indies is in its last phase, with only two Test matches left.

India will begin their World Test Championship campaign on Thursday against the West Indies in Antigua.