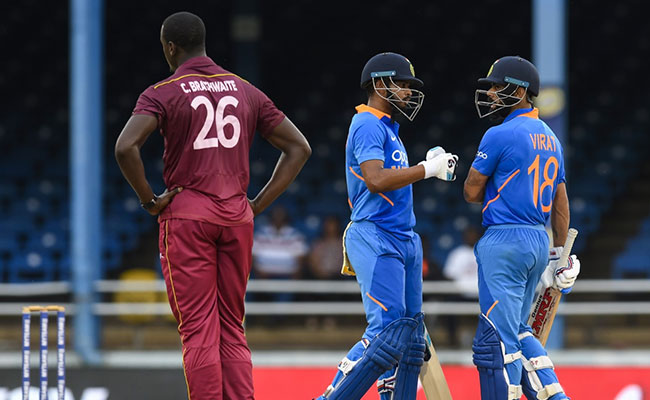 Virat Kohli was full of praise for middle-order batsman Shreyas Iyer, who scored a 65-run knock and stitched a century stand with the skipper as India defeated the West Indies by six wickets (DLS) in the third One-day International in Port Of Spain on Wednesday. Having swept the T20 International series 3-0, India clinched the three-match ODI series 2-0 as the opening match was abandonded due to rain in Guyana. "The way he (Shreyas Iyer) batted out there, he took a lot of pressure off me. His knock was the game-changer," Virat Kohli said after India's series triumph in Trinidad.

"We want to have people take responsibilty at different batting positions. He completely played in full control and was putting pressure on the bowlers," Kohli added.

Kohli hammered his second consecutive hundred to guide India to a series-clinching victory.

Earlier, Chris Gayle smashed his way to a 72-run knock and powered the hosts to a competitive 240 for seven in the rain-curtailed match after they elected to bat.

India were set a stiff revised 255-run target on Duckworth-Lewis method but Kohli's unsatiable appetite for runs and young Iyer's assuring support to his skipper meant that it eventually turned out to be a comfortable six-wicket win which translated into a 2-0 series victory.

The weather continued to play havoc in this tour of India as the rain forced two interruptions.

Kohli said India were "a bit nervous" with the rain interruptions but their bowlers did a great job.

"We were a bit nervous when the rain break happened. We felt that with DLS, the game can go out of our reach. The outfield got wet as well, we thought they could capitalise but the bowlers did a great job," the Indian captain said.

It was India's ninth consecutive ODI series win, at home and away, over the West Indies.

Virat Kohli Shreyas Iyer West Indies vs India 2019 Cricket
Get the latest updates on IPL 2021, check out the IPL 2021 Schedule and Indian Premier League Live Score . Like us on Facebook or follow us on Twitter for more sports updates. You can also download the NDTV Cricket app for Android or iOS.