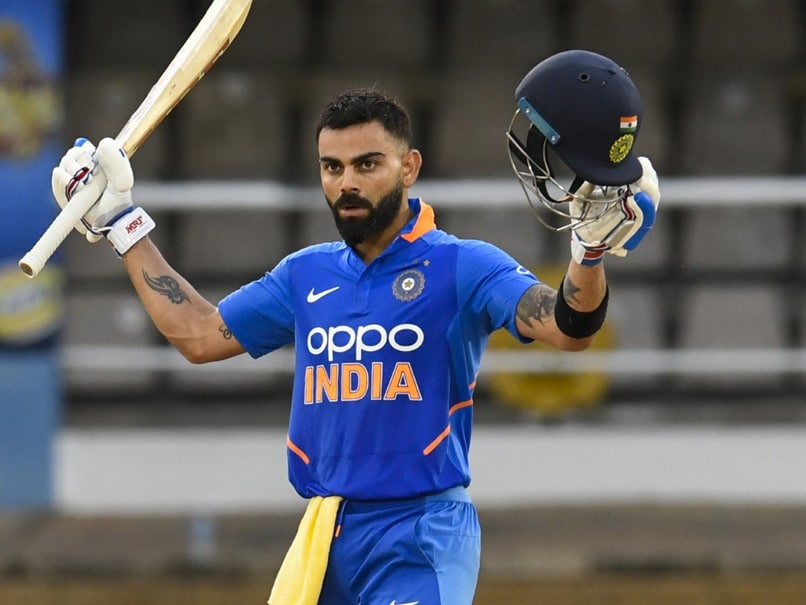 Virat Kohli scored his 43rd ODI centuryas India defeated the West Indies, chasing down 255 runs in 33rd over to win the three-match series 2-0 in Port of Spain on Wednesday. The match was reduced to a 35-over per side game due to rain. The West Indies managed to post a competitive total of 240 for seven in 35 overs. The revised target for India was 255. India lost the wicket of Rohit Sharma early in the chase but Virat Kohli and Shikhar Dhawan steadied the innings for India. Rishabh Pant failed with the bat once again as he went for a golden duck. Shreyas Iyer continued his good run with another half-century that played a pivotal role in India's win.

In what appeared to be his last ODI for the West Indies, Gayle smashed his way to a 72-run knock, leading the hosts to a competitive 240 for seven in the rain-curtailed match after they elected to bat.

Soon after his dismissal, the Indian players rushed towards Gayle, shaking hands with him. Kohli even performed typical Gayle jig before the burly West Indian walked off.

Gayle, in his inimitable style, put his helmet on the top of his bat's handle and lifted the bat in the air while walking off. Near the boundary ropes, he hurled the helmet in the air only to catch it back. The gestures suggested that Gayle has played his last ODI. India were set a stiff revised 255-run target on Duckworth-Lewis method but Kohli's unsatiable appetite for runs and young Shreyas Iyer's assuring support to his skipper meant that it eventually turned out to be a comfortable six-wicket win which translated into a 2-0 series victory.

The counter-attacking 65-run knock by Iyer was game-changing as he took the pressure off his captain.

It was India's ninth consecutive ODI series win, at home and away, over the West Indies.

Coming out to bat when India had lost opener Rohit Sharma (10), Kohli raised his 43rd ODI hundred and in the process crossed the phenomenal 20,000 runs mark in international cricket.

Kohli remained unbeaten on 114 and completed the win with back-to-back boundaries off Carlos Brathwaite. His dominant knock came off 99 balls with 14 fours and the Indian captain now averages 60.31 in ODIs. Kohli had scored 120 in second ODI.

After Shikhar Dhawan (36) squandered a start, wicket-keeper batsman Rishabh Pant showed that he is not learning from his mistakes as he was again guilty of playing a reckless shot, getting a first-ball duck.

In complete contrast, Iyer played smartly and with maturity to raise a crucial 120-run stand with Kohli for the fourth wicket, taking the team near the target.

His knock came off 41 balls with five sixes and three boundaries. When he was dismissed, India needed 43 more runs from 40 balls but Kedar Jadhav (19 not out) ensured there was no twist in the tale. He raised an unbeaten 44-run stand for the sixth wicket.

Earlier, the West Indies reached a healthy 158 for two in 22 overs when rain forced a second interruption and at resumption the contest was reduced to 35-overs-a-side.

Shai Hope (24) and Shimron Hetmyer (25) resumed the innings but they did not last long with Mohammed Shami dismissing the latter and Ravindra Jadeja cleaning up the former.

Shami struck again by sending back Pooran, who chipped a full-length delivery straight to Mainsh Pandey. Carlos Brathwaite added 16 runs with a six and a four. Gayle came out with a clear plan to attack the Indian bowlers, making the most of what seemed his last international performance.

Whether it was Bhuvneshwar Kumar, Shami or Khaleel Ahmed (3/68) no Indian pacer was spared with Gayle hammering them for sixes with remarkable ease.

Spinner Chahal was the only bowler who commanded some respect from the West Indian marauder.

The left-handed opener -- the self proclaimed Universe boss -- punished the Indian bowlers with five sixes and eight shots to the fence in his entertaining knock.

He added 115 runs with fellow opener Evin Lewis, who was equally impressive with his 29-ball 43 which was laced with five fours and three sixes.

It was Chahal who brought some relief for the Indian camp by dismissing Lewis and soon Gayle too departed by hitting one straight to rival captain Virat Kohli at mid-off.

India Cricket Team West Indies vs India 2019 Cricket West Indies vs India, 3rd ODI
Get the latest updates on IPL 2021, check out the IPL 2021 Schedule and Indian Premier League Live Score . Like us on Facebook or follow us on Twitter for more sports updates. You can also download the NDTV Cricket app for Android or iOS.