Ishant Sharma has been in good form during the Test series against the West Indies, both with ball and bat. 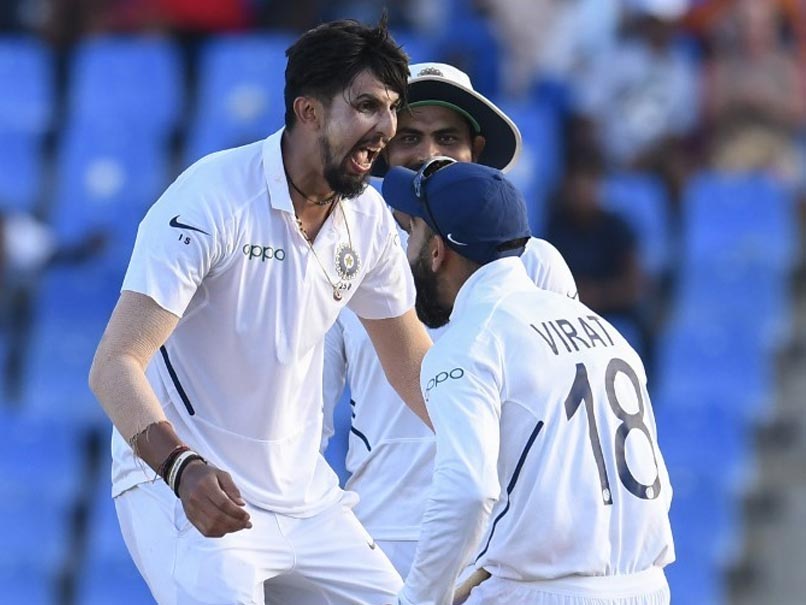 The India vs West Indies second Test, being played at the Sabina Park in Jamaica, has seen Indian players excel and achieve big milestones. While Jasprit Bumrah became only the third Indian cricketer to take a Test hat-trick, one man has been blazing his own trail in the match. Ishant Sharma scored his maiden half-century on Saturday as the lanky pacer, along with Hanuma Vihari, pretty much, batted the hosts out of the game. After getting the job done with the bat, Sunday witnessed Ishant Sharma achieve a massive record with the ball in hand. The 31-year-old fast bowler surpassed the great Kapil Dev to become the most successful Indian pacer outside Asia.

Ishant Sharma reached the big landmark in the 47th over of West Indies' first innings when he dismissed Jahmar Hamilton for 5. With it, Ishant Sharma claimed his 156th wicket outside Asia to leapfrog Kapil Dev into top place among Indian pacers.

Kapil Dev had taken 155 wickets in 45 Tests outside Asia, same as Ishant Sharma. Third in the list is Zaheer Khan who took 147 wickets in 38 Tests while Mohammed Shami has 101 wickets outside Asia in 28 matches.

Ishant Sharma added another wicket to his tally when he sent Kraigg Brathwaite packing for 3 in West Indies' second innings.

But Ishant still has a long way to go to before he can catch Anil Kumble who tops the list of Indian bowlers with most Test wickets outside of Asia.

Kumble took 200 wickets in 50 matches for India outside Asia.

Ishant Sharma will have another chance to close the gap on Kumble on Day 4 of the second Test on Monday.

The West Indies, who were set an improbable target of 468 by India, were 45 for two at stumps on Day 3, still needing 423 runs to save the series.

Jasprit Bumrah West Indies vs India 2019 West Indies vs India, 2nd Test Cricket
Get the latest updates on IPL Auction 2023 and check out  IPL 2023 and Live Cricket Score. Like us on Facebook or follow us on Twitter for more sports updates. You can also download the NDTV Cricket app for Android or iOS.