Navdeep Saini made a remarkable debut for India as he finished with figures of three for 17. 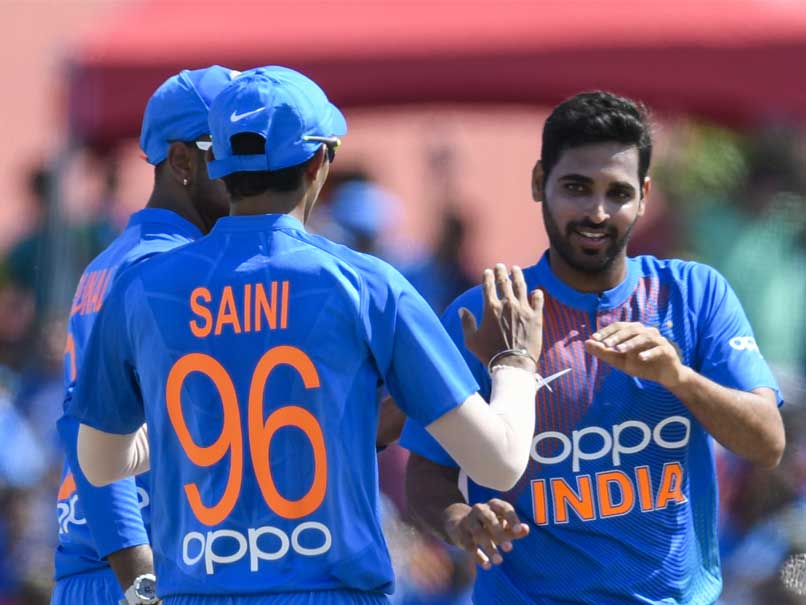 India defeated the West Indies by four wickets in the first T20 International in Florida on Saturday. Young fast bowler Navdeep Saini was the star of the show, making a spectacular debut with figures of three for 17 off his four overs. Saini's performance with the ball helped India restrict the West Indies to a below par total of 95 for nine which India managed to chase down with 16 balls to spare.  For his brilliance with the ball, Saini was adjudged as the player of the match. Bhuvneshwar Kumar, India's frontline fast bowler, lavished praise on Saini and said that he is always available to guide the youngsters in the team.

"When young players like Navdeep Saini does well and Khaleel (Ahmed) does well, you want to always talk to them. You want to make them comfortable. That is the first thing I want to do and I always guide them," Bhuvneshwar Kumar was quoted as saying by PTI.

Bhuvneshwar Kumar is happy with the coming up of bright prospects like Navdeep Saini and says he's always ready to guide the youngsters when they come in to the national team.

"As a senior player you always want to perform. Even you could not perform you have to contribute to the team. That is the first thing I want to do and luckily I did that," Bhuvneshwar said at the post-match press conference.

Bhuvneshwar was all praise for Saini who starred in the India's win with figures of 3/17 in his India debut match.

"Just before coming into the team he played for India A against West Indies A in West Indies. That is why he did well. When you do well at international level, it gives you a lot of confidence," Bhuvneshwar said.

"He has bolwed really well. The most important thing is, he has proved in different stages. He plays so much of cricket, in IPL and for India A. So when he came into the (senior national) team he was very confident."

Asked about the switching from ODI cricket to T20 format, he said, "Not really mental adjustment because T20 and ODI are the same, not the same format but you have to bowl deck bowling in ODI and T20 as well," Bhuvneshwar added.

"It is only that T20 is a shorter format and when you go to ODI, it takes more load on the body. This is something we always take care of," Bhuvneshwar said.

He said the pitch used for the first T20 International match was a bit sticky as it was under cover in the last two days, and was not easy to bat on.

"The ball was not really coming onto the bat, it was a bit difficult for the batsmen. In the morning, it was a bit moist but got better in the second innings as the sun was out by then," Bhuvneshwar concluded.

Bhuvneshwar Kumar Navdeep Saini
Get the latest updates on IPL Auction 2023 and check out  IPL 2023 and Live Cricket Score. Like us on Facebook or follow us on Twitter for more sports updates. You can also download the NDTV Cricket app for Android or iOS.