The Ashes, Australia vs England 4th Test: England spinner Jack Leach was egged on by the crowd as he gave his autograph on the bald head of a fan on Day 1 of the fourth Ashes Test. 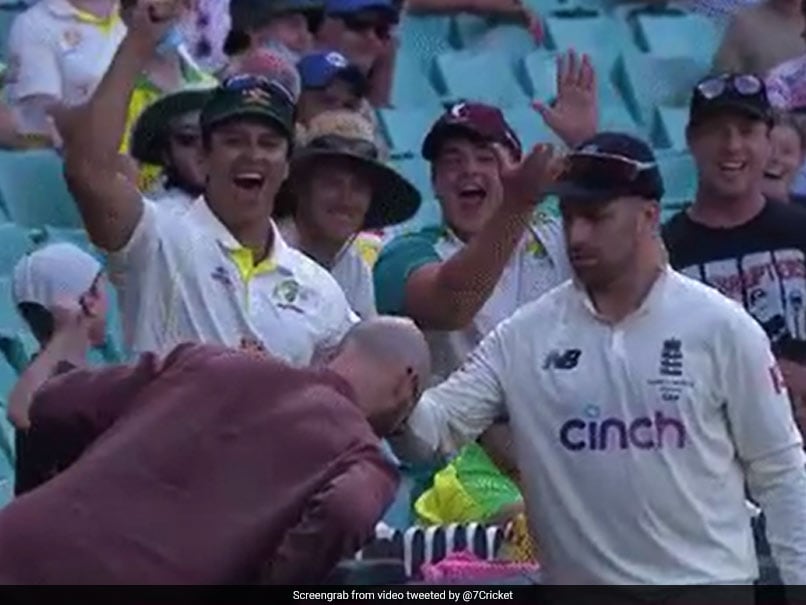 AUS vs ENG: Jack Leach enjoyed his time while fielding in the outfield.© Twitter

England fans didn't have much to cheer about on a gloomy and rain-interrupted Day 1 of the fourth Ashes Test match being played at the Sydney Cricket Ground. Despite the home team losing three wickets for 126 runs at stumps, England bowlers looked short of inspiration at times, having already lost the ongoing Ashes after losing the first three of the five-match series. However, spinner Jack Leach didn't seem much perturbed by doom and gloom surrounding the English team and brought his cheerful self to the field. In between the proceedings of the game, Leach became an instant crowd favourite on Wednesday as he signed a fan's bald head.

The entire SCG saw the event on live screen and a huge cheer went across the field. Here's a video of the incident:

In between frequent rain stoppages, 46.5 overs were squeezed in by the visitors.

Openers David Warner and Marcus Harris showcased immense application and concentration despite the breaks to get Australia up and running. However, veteran pacers Stuart Broad and James Anderson provided the much-needed breakthroughs as they got rid of the batters for 30 and 38 runs, respectively.

In-form batter Marnus Labuschagne endured a tough time in the middle and was eventually dismissed by Mark Wood for 28 runs.

Steve Smith and Usman Khawaja were in the middle when rain stopped play and the umpires decided to call stumps on Day 1.

Earlier in the day, Anderson received his 169th Test cap to become the second-most capped Test player in the game's history.

Australia Cricket Team Jack Leach The Ashes, 2021/22 Cricket
Get the latest updates on ICC Women's Cricket World Cup 2022 and IPL 2022, check out the Schedule , Live Score and IPL Points Table. Like us on Facebook or follow us on Twitter for more sports updates. You can also download the NDTV Cricket app for Android or iOS.