Czech world number 15 Berdych, the 2010 Wimbledon runner-up, goes on to face Roger Federer or Milos Raonic for a place in Sunday's final. 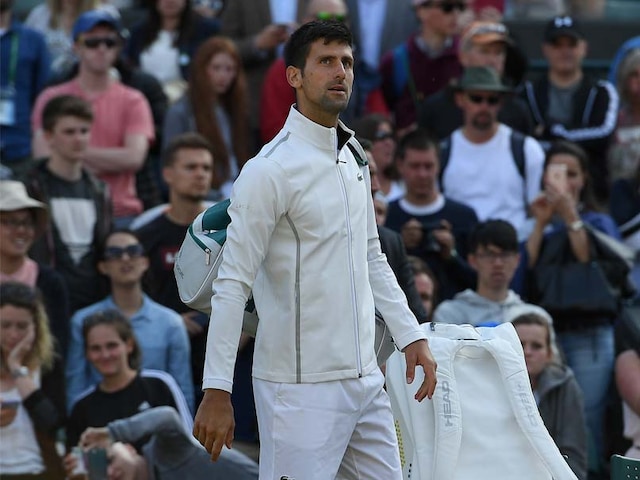 Novak Djokovic said a right elbow injury was to blame for his retirement from Wednesday's Wimbledon quarter-final against Tomas Berdych. Djokovic needed treatment on his elbow at the end of the first set and was already dealing with a long-term right shoulder problem. The three-time Wimbledon champion, who would have regained the world number one ranking if he had won the tournament, was trailing 7-6 (7/2), 2-0 when he called it quits on Court One. Czech world number 15 Berdych, the 2010 Wimbledon runner-up, goes on to face seven-time champion Roger Federer for a place in Sunday's final.

"It's my elbow. It's been bothering me for a year and a half. It's unfortunate I have to finish Wimbledon like this," said Djokovic after his first Grand Slam retirement since the 2009 Australian Open quarter-finals.

"I started feeling it at the beginning of the tournament. The level of pain was always increasing and today was the worst day.

"I tried what I could do to get it in condition to be able to play.

"All the treatments couldn't really help. The serve and forehand were the shots I could feel it most."

Djokovic was especially frustrated to have had to pull out with an injury after complaining bitterly that Wimbledon organisers should have allowed his last 16 match to be played on Monday evening instead of Tuesday morning.

The 12-time Grand Slam champion had to face Adrian Mannarino a day later than scheduled due to the late finish of Rafael Nadal's defeat against Gilles Muller.

Djokovic had needed treatment on his shoulder during his victory over Mannarino.

"Those kinds of circumstances don't really help. This is the kind of situation you have to accept and try to make the most out of it," Djokovic said.

"I spent about two hours on the treatment table in between the warm-up and the match to make me fit.

"It wasn't to be. For an athlete in an individual sport, there is no way out when you are injured.

The 30-year-old Serb had held a 25-2 career record over Berdych and hadn't lost to the Czech in four years.

But instead of extending that streak, the world number four will leave London nursing his injury and his pride as the worst period of his career shows no sign of improving.

Since winning the French Open last year to complete his career Grand Slam, Djokovic has failed to win another major title.

He crashed out of the Australian Open in the second round and the French Open in the quarter-finals.

With world number one Andy Murray crashing out against Sam Querrey earlier on Wednesday, Djokovic walked onto Court One knowing he would regain top spot in the rankings if he won Wimbledon for a fourth time.

But if that should have served as extra motivation for Djokovic, there were immediate signs that his fitness was a problem when a sloppy tie-break cost him the first set.

The Serb called for a medical timeout after the first set to have his right elbow massaged by a physio.

But Berdych seized the chance to add to Djokovic's woes with a break in the second game of the second set.

That was the signal for Djokovic to trudge forlornly to the net to withdraw from the match.

Comments
Topics mentioned in this article
Novak Djokovic Tomas Berdych Tennis
Get the latest Cricket news, check out the India cricket schedule, Cricket live score . Like us on Facebook or follow us on Twitter for more sports updates. You can also download the NDTV Cricket app for Android or iOS.