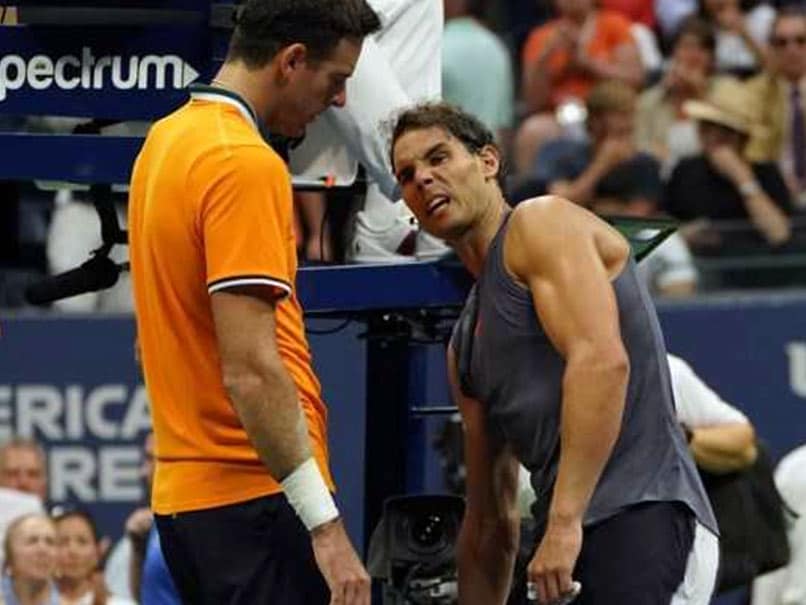 Rafael Nadal retired due to knee injury in his US Open semifinal against Juan Martin del Potro.© AFP

Juan Martin del Potro reached the US Open final on Friday after defending champion and world number one Rafael Nadal retired from their last-four clash with a knee injury. Third seed Del Potro, the champion in 2009, was 7-6 (7/3), 6-2 ahead when Nadal retired. The Argentine will face either Novak Djokovic, the 2011 and 2015 winner in Sunday's final. "I hate to retire," said Nadal who has endured a series of knee injuries throughout his career. He also retired trailing in the fifth set of his Australian Open quarter-final against Marin Cilic in January.

"It's not a match when one is playing and the other is at the side of the court."

Nadal, bidding for a fourth title in New York and 18th major, had spent the best part of 16 hours getting to the semi-finals.

That effort took its toll with the Spaniard twice needing to have his right knee bandaged before calling it a day after the conclusion of the second set.

"Well of course it's not the best way to win a match. I love to play against Rafa because he's the biggest fighter in this sport and I don't like to see him suffering," said 29-year-old Del Potro who will be playing in his second Slam final.

Nadal's challenge looked doomed even as early as the first set, feeling the injury after just four games, he admitted.

He needed his right knee strapped after the seventh game before gallantly fighting off two set points in the 10th game, breaking Del Potro who was serving for the set.

But the big Argentine swept through the tiebreaker, wrapping up the opener after 69 minutes of impressive shot-making.

The Spaniard called a medical timeout after three games of the second set to have the right knee rebandaged.

Del Potro sensed blood and broke for 3-1 as Nadal struggled for movement.

He broke again for 5-2 on his way to a two-set lead and eventual victory.

"It means a lot to be back in the final," added Del Potro after his sixth win over Nadal, all on hard court.

"I didn't expect to get to another Grand Slam final in my favourite tournament.

"I had my biggest memories on this court in 2009 when I beat Rafa and Roger (Federer, in the final). I was a kid then; now i am much older."

Novak Djokovic Kei Nishikori Tennis
Get the latest updates on ICC T20 Worldcup 2022, check out the Schedule and Live Score. Like us on Facebook or follow us on Twitter for more sports updates. You can also download the NDTV Cricket app for Android or iOS.