Watch: Tennis Stars Get Into Physical Altercation After Match In France 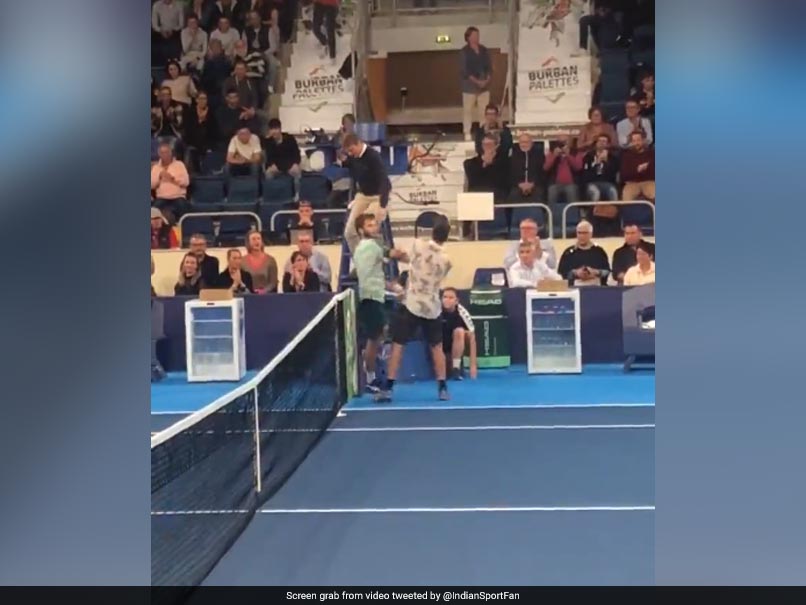 French tennis player Corentin Moutet and Bulgaria's Adrian Andreev got physical following their Round of 16 match at the Orleans Challenger tournament. Andreev, ranked 247th in the world, stunned top-seeded Moutet 2-6 7-6 (7-3) 7-6 (7-2). Things, however, got ugly between the two players at the post-match handshake as Moutet and Andreev held on to each other's hand for a while and exchanged words. However, Andreev appeared to bump Moutet, before things got physical between the two. Moutet then screamed at the Andreev, and also nudged the Bulgarian in anger.

While the players continued to exchange words with each other, the chair umpire had to intervene and prevent the altercation from escalating further.

"I wish to make no apologies for what happened late in the game. When a player says "f*** you", twice while looking at me in the eye, I can't help but make him understand in my own way that that is not done," Moutet wrote in a social media post after the match.

Talking about the match, Moutet started strongly after breaking Andreev early to take a 3-0 lead.

The Frenchman then saved three break points to take the first set 6-2.

In the second set, both Moutet and Andreev exchanged breaks. In the tie-break, Moutet had opened up a 3-1 lead before Andreev won six point in a row to take the second set 7-6 (7-3).

The third set also ended in a similar fashion as Andreev won five points on the bounce in the tie-break to pull off an upset over the Frenchman.