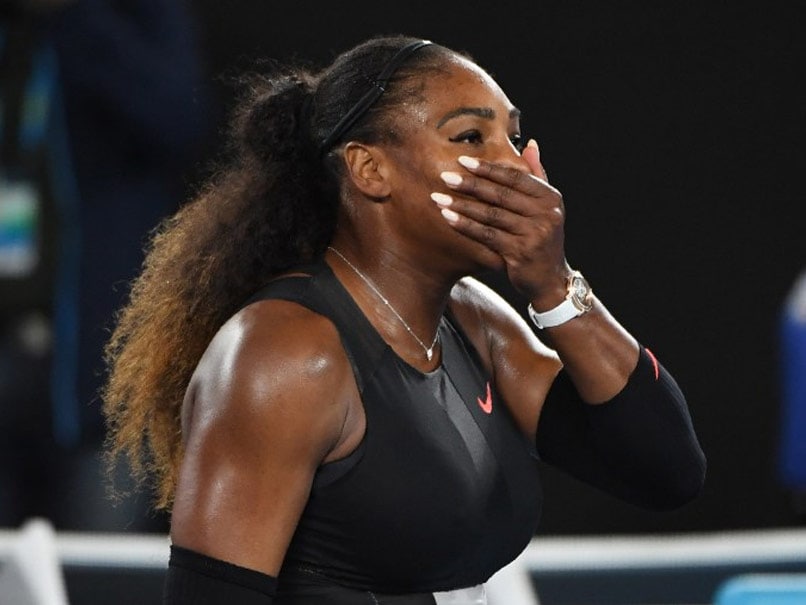 Get highlights of the Australian Open women's singles final here.

15:45 IST:Serena Williams celebrates the victory in style. That's it from us. Hope you enjoyed our coverage. Adios!!

SHE'S DONE IT! No. 23@serenawilliams is your #AusOpen 2017 women's singles champion. pic.twitter.com/LC6fpWi3Ik

15:27 IST:Take a bow Venus Williams!! Such a long rally between the sisters and Serena gave it away. She leads 30-15

15:25 IST:Venus holds and puts the pressure back on Serena to serve out the match, with Grand Slam No. 23 on the line.

15:21 IST:Serena sees the finishing line now. Wins the game and leads 5-3 in the second set

15:10 IST:Superb drop point by Venus. She is giving a tough fight to the World No.2

15:03 IST:Serena holds the serve to level the scores. The unforced errors are creeping into Venus' game. It's 2-2 now

14:58 IST:Serena hits two aces in that last game to serve out the opening set. She's one set away from her 23rd Grand Slam title.

14:56 IST:Can Serena close it out? She hasn't dropped a set this tournament. She takes the second game and level scores at 1-1

14:55 IST:Venus holds and takes the first game in the second set.

After 41 minutes, the younger Williams grabs the 1st set 6-4. She's now a set away from Grand Slam No. 23#AusOpen pic.twitter.com/tsVzrclcDY

#Venus, on #Serena: "When I'm on the court with her, I'm playing the best competitor in the game... I don't think I'm chump change either." pic.twitter.com/15lkWCbo8h

#Serena has her eyes on the Championship #AusOpen pic.twitter.com/gOtz0ckOAF

14:39 IST:Serena secures another break with the powerful shot and takes 4-3 lead in the first set

14:36 IST:Now Serena holds her serve to level the scores at 3-3 in the first set

14:33 IST:Venus has been agile and active. She is the oldest women's singles finalist in a grand slam ever. Who was expecting that?

14:32 IST:Two game points andVenus holds her serve for the first time in the match. Takes 3-2 lead in the first set

14:30 IST:Now, that doesn't happen often. Now, Venus breaks the serve again to level the score at 2-2 in the first set

14:27 IST:Two double faults and she responds it with an ace. Deuce again!!

14:25 IST:This is impressive from Venus!! Superb forehand by her and Serena misjudges it. It's 30-30 in the fourth game.

14:23 IST:Clinical finish by Serena as she breaks Venus' service again to take 2-1 lead in the first set

14:20 IST:It's been a high quality start in the women's singles final here at the Rod Laver arena. It's deuce again in the third game

14:19 IST: Ohh that's unreal!!Serena Williams slips in the court and breaks her racquet

14:17 IST:Venus clinches it following an unforced error by Serena

14:15 IST: Venus Williams breaks the service back immediately to restore parity at 1-1 in the first set

14:13 IST: Venus is giving Serena a tough competition in the second game and its deuce here 40-40

14:11 IST:Serenaseals the first game of the match with a powerful forehand

14:10 IST:Serena Williams starts it with a bang!! She breaks the first game and take 1-0 lead in the first set

The women’s final has arrived. Welcome @Venuseswilliams and @serenawilliams onto RLA #AusOpen pic.twitter.com/B5py04fp0k

14:04 IST: The players (and sisters) are out on the court! Serena wins the toss and opts for the side. Venus will serve.

14:02 IST:If Serena Williams wins here, she will regain the No.1 ranking

13:57 IST:The players are all set for the big clash. 9 years ago Venus won the last Grand Slam title.

13:55 IST:The Rod Laver Arena is all in readiness to hold the big final match between Serena Williams and Venus Williams

13:49 IST:The Williams sisters last met in the final of a Grand Slam event in 2009, when Serena beat Venus at Wimbledon.

Serena advanced to the final after beating Mirjana Lucic-Baroni in straight sets in the semifinal, while Venus beat fellow American CoCo Vandeweghe in three sets, coming back from a set down to reach her first major final since Wimbledon 2009

13:46 IST:At 36, Venus Williams can be the oldest to win the women's singles title

13:45 IST: Serena Williams, in last 8 meetings against Venus Williams, has won 7 matches. Will she continue the winning streak?

13:42 IST:  It will not get bigger than this!!Serena looks to win her seventh title in Melbourne and 23rd major overall and No. 13 Venus aims to win the Australian Open for the first time in her career.

13:40 IST:Welcome to the live blog of women's singles finals between Serena Williams and Venus Williams

Venus, who has won seven Grand Slam finals and lost another seven, has become the Australian Open's oldest finalist in the Open era as she attempts to crash her sibling's party.

Serena and Venus have played 27 times against each other in their long careers, including contesting eight Grand Slam finals. Serena holds a 6-2 edge in the major deciders, with a 16-11 win-loss record overall.

While Serena blew away Mirjana Lucic-Baroni of Croatia 6-2, 6-1 in the semifinal, Venus had to comeback from being a set down to defeat compatriot CoCo Vandeweghe 6-7(3), 6-2, 6-3.

Comments
Topics mentioned in this article
Serena Williams Michael Venus Venus Williams Live Blogs Tennis
Get the latest updates on India vs South Africa and check out  Schedule, Results and Live Score. Like us on Facebook or follow us on Twitter for more sports updates. You can also download the NDTV Cricket app for Android or iOS.