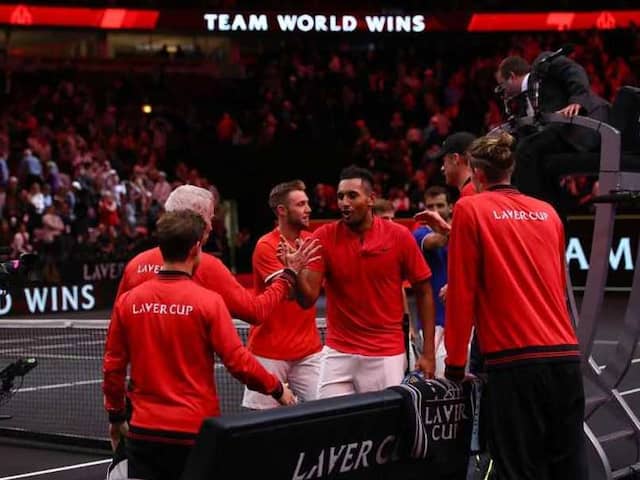 Team World dominated the night session to climb back into contention at the 2018 Laver Cup.© AFP

Kevin Anderson avenged a Wimbledon finals loss to Novak Djokovic as Team World dominated the night session Saturday to climb back into contention at the 2018 Laver Cup. Anderson's surprise win, combined with a doubles victory by World's Jack Sock and Nick Kyrgios over Grigor Dimitrov and David Goffin, slashed Europe's overall lead to 7-5 heading into Sunday's third and final day of the exhibition tournament. Earlier Saturday, Roger Federer and Alexander Zverev powered Europe into a commanding 7-1 lead by winning their singles matches to set a daunting task for the underdog World team in Chicago.

South Africa's Anderson got the fight back started by upsetting reigning Wimbledon and US Open champ Djokovic 7-6, 5-7, 10-6 to earn two points for Team World at the United Center arena.

"We've had some really close matches that haven't gone our way and I really wanted to put us back in there," said Anderson.

"It's not easy playing one of the best players of all time, but what an amazing atmosphere.

"It's just fantastic, for so many reasons. I felt I played a great match - beating Novak on any stage is great and here in Chicago makes it extra special."

Defending champion Europe needs 13 points to take the title, which is being held for the second time.

Djokovic, who was making his Laver Cup singles debut, partnered with Roger Federer in doubles on Friday night where they lost to Anderson and Sock.

Heading into Saturday's match, 14-time grand slam winner Djokovic held a 6-1 career advantage, including a 6-2, 6-2, 7-6 (7/3) win over Anderson in July at Wimbledon. This was Anderson's first singles win over Djokovic in a decade.

On Saturday, they played the fourth 10 point tiebreaker of the tournament and it was the first win for Team World. Under the format being used for the tournament, a tiebreak is used instead of a decisive third set.

Anderson closed it out when the Serb fired a forehand into the net and the South African was mobbed by his teammates.

"Kevin was so well prepared for this, we needed this bad," said World captain John McEnroe. "It was absolutely awesome."

World number two Roger Federer was barely ruffled as he cruised to a 6-3, 6-2 win over Kyrgios.

"I felt good from the beginning of the match and that's not usual," said Federer. "Usually you need matches to get going and play your best in the third round or quarters of a tournament."

After dominating Friday's opening day, winning three out of the four matches, Europe's progress looked to be checked after Isner grabbed the first set against Zverev.

But rising German star Zverev showed great determination in saving a match point at 6-5 down in the second-set tie-break to level the contest.

Zverev then raced into the lead in the tiebreak before closing out for the win.

Novak Djokovic Kevin Anderson Roger Federer Grigor Dimitrov Nick Kyrgios Jack Sock Tennis
Get the latest Cricket news, check out the India cricket schedule, Cricket live score . Like us on Facebook or follow us on Twitter for more sports updates. You can also download the NDTV Cricket app for Android or iOS.