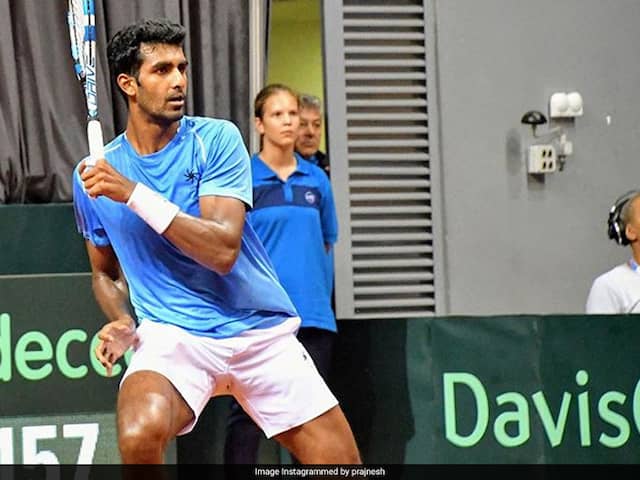 Prajnesh Gunneswaran is part of David Cup squad which is scheduled to travel to Pakistan.© Instagram

In a big snub to India's national tennis federation, the world governing body ITF on Wednesday refused to either postpone or shift the Davis Cup tie against Pakistan out of Islamabad. The International Tennis Federation (ITF) has communicated to the All India Tennis Association (AITA) that timings or the venue for the September 14-15 tie won't change as of now. Earlier in the day, AITA had asked ITF to either postpone the tie or take it to a neutral venue "suo moto" given the current diplomatic tension between the two countries.

"They have shared their security plans and based on that, they feel the timings (dates) or the venue need not shift. They are not understanding the tension that has been prevailing between the two nations," AITA secretary general Hironmoy Chatterjee told PTI.

"We had asked for a dialogue with the ITF Board but they said the Board does not deal with Davis Cup matters, it's the Davis Cup committee which does. So ITF security advisors and Executives will now discuss the matter with us on August 19.

"Now we will try to convince that they postpone the tie or provide us an alternate venue. If they do not agree, we will take a call on Monday what to do next," Chatterjee said.

It has been learnt that India's non-playing captain Mahesh Bhupathi has requested the AITA to include him also in the conference call so that he could speak on behalf of the players.

Sources told PTI that Bhupathi has even forwarded a communication to the ITF through AITA, trying to convince them on a neutral venue.    When contacted, Bhupathi neither confirmed nor denied the information.

The AITA, taking a more aggressive stance than earlier, had said it wants the ITF to take the call to shift the venue based on the current situation and expressed surprise that the governing body is asking India to make a request as "this responsibility rests with the ITF".

Comments
Topics mentioned in this article
Tennis Mahesh Bhupathi
Get the latest Cricket news, check out the India cricket schedule, Cricket live score . Like us on Facebook or follow us on Twitter for more sports updates. You can also download the NDTV Cricket app for Android or iOS.