In comments to the news media, association officials have said they will no longer negotiate with the players and may cut off government grants to those who refuse to play next month. Some players receive government training grants of as much as 1.5 million rupees, or a little more than $27,000. 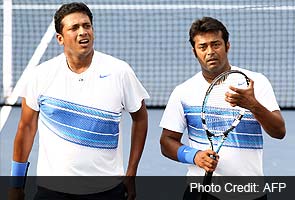 In a reprise of the operatic bickering last summer over the Olympics, India's top tennis players are once again locked in a bitter dispute with the national tennis association.

Eight players banded together last week during the Chennai Open, India's only top-tier tennis tournament, and sent a letter to the All India Tennis Association demanding personnel and financial changes in the country's Davis Cup effort before they would agree to play in a matchup against South Korea in February.

An association official responded by saying that any new agreement with the players would have to include a disciplinary code, which enraged the players. Since then, relations have deteriorated further.

Detailed and lengthy demand letters have become public, with both sides stating that certain demands were nonnegotiable.

The players asked for a specific physiotherapist, that all players be given similar travel arrangements and that the apportionment of prize money be done transparently. The association agreed to increase players' share of the prize money, but said its officials would select the team captain and support staff.

In comments to the news media, association officials have said they will no longer negotiate with the players and may cut off government grants to those who refuse to play next month. Some players receive government training grants of as much as 1.5 million rupees, or a little more than $27,000.

"The players who want to play for India will get all the support," Hironmoy Chatterjee, the tennis association's chief executive, told The Press Trust of India. Mahesh Bhupathi, one of the eight players who have threatened to boycott the Davis Cup, said in an interview that he was confident a resolution would be reached.

"At the end of the day, we're not asking for the moon," he said. "These are basic requirements."

The tennis mess is just one of a series of troubles that have befallen prominent sports in India over the past year. In December the International Olympic Committee suspended the Indian Olympic Association, an intensely embarrassing episode that remains unresolved. India's boxing and archery federations have also been suspended.

The country's sports associations have been plagued by nepotism and corruption, making India, despite its vast population and growing economic might, a paper tiger in most international competitions. India has won only 26 Olympic medals, fewer than Slovakia or Ireland.

India doesÂ  not have a tennis player ranked in the top 200 in singles. Its two best players are Leander Paes and Bhupathi, doubles specialists who won three Grand Slam titles together but had a rancorous breakup.

In the end, Paes agreed to play men's doubles with a lower ranked Indian player only if he was allowed to play mixed doubles with Sania Mirza, India's highest ranked female player and Bhupathi's longtime mixed doubles partner. Mirza went along with the switch but not without complaining about male chauvinism on the part of the association.

"As an Indian woman belonging to the 21st century, what I find disillusioning is the humiliating manner in which I was put up as a bait to try and pacify one of the disgruntled stalwarts of Indian tennis," she said last summer.

Mirza and Paes, who has won 13 Grand Slam titles in doubles and mixed doubles, lost in the quarterfinals. India won no medals in tennis in London, and sports commentators savaged almost everyone involved in the fiasco.

In September the tennis association barred Bhupathi and Bopanna from playing for India for two years because of the Olympics bickering, an action that prompted Bhupathi to hold a news conference to criticize the association's "dictatorial rule." The action has since been stayed by an Indian court. Now a new crop of young players has joined Bhupathi's fight against the tennis association because many have played in the United States and got a taste for effective sports management, said Sukhwant Basra, the national sports editor for The Hindustan Times.

"They are educated kids from good families who are raising questions about things the older generation took for granted," he said. "It's about time this happened."

Chatterjee told Reuters that the association would choose its Davis Cup roster from those players who declare their availability by Thursday.

Rahul Mehra, a lawyer who has filed suit against the tennis association as well as other sports governing bodies in India, said corrupt and feckless sports management had led generations of players in India to fail to reach their potential. The present controversies, he said, may finally prompt needed change.

"Indian sports have reached an all-time low," he said. "But someday we will get the right infrastructure in place, and India will become a superpower in sports."

Comments
Topics mentioned in this article
Tennis Sourav Ganguly Leander Paes Mahesh Bhupathi Prakash Amritraj Ivo Karlovic Aisam-Ul-Haq Qureshi Rajeev Ram Rohan Bopanna Su-Wei Hsieh
Get the latest updates on ICC T20 Worldcup 2022 and CWG 2022 check out the Schedule, Live Score and Medals Tally. Like us on Facebook or follow us on Twitter for more sports updates. You can also download the NDTV Cricket app for Android or iOS.