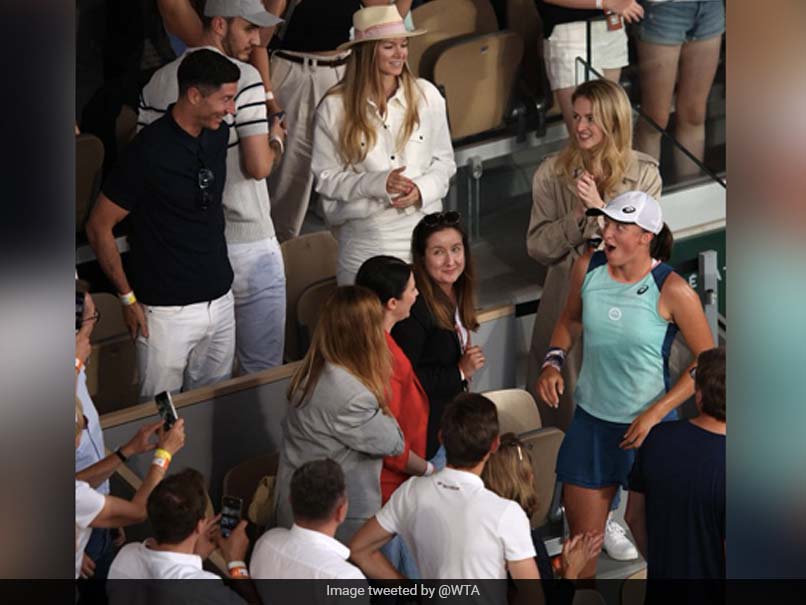 The 21-year-old Iga Swiatek on Saturday won her second French Open title after defeating Coco Gauff 6-1, 6-3 in the women's singles final. The tennis star from Poland was at her best in the summit clash and she did not give any chance to Gauff to make a comeback. After the win, Swiatek was seen going up to the stands and hugging Bayern Munich star Robert Lewandowski who represents Poland in international football.

Upon seeing the Bayern Munich superstar, Swiatek was visibly shocked and had a priceless reaction.

The official handle of Roland Garros then shared the video of Lewandowski hugging Swiatek and captioned the post as: "Two legends."

When asked about meeting Lewandowski during a press conference, Swiatek said: "I am happy that he is here honestly. I do not know if he is a huge tennis fan or not. But I mean, Wow! He has been a top athlete in our country for so many years that it still feels like, it is hard to believe that he came to watch me. Just overawed.

Fans on Twitter also took notice of how Swiatek reacted upon seeing Lewandowski in the stands.

Polish player Iga Swiatek's face when she saw Robert Lewandowski came to support her in the Roland-Garros final pic.twitter.com/vkGnBO2idT

Absolutely love this photo of Iga Swiatek spotting compatiot Robert Lewandowski in the crowd after her Roland Garros triumph pic.twitter.com/0Y31rxyWfN

Polish player Iga Swiatek's face when she saw Robert Lewandowski came to support her in the Roland-Garros final.
And yes, she won. pic.twitter.com/Xf3VooyQC4

So cool to see Lewandowski at the #FrenchOpen Final supporting his fellow Poland native, Iga Swiatek

As a result of winning the French Open final, Swiatek now has 35 wins on the trot, matching Venus Williams' record for the longest winning streak by a women's player in the 21st century.

Venus Williams won five WTA titles and the Olympic gold medal during her unbeaten run at the start of the century.

Swiatek has lifted four WTA 1,000 titles in that time -- in Doha, Indian Wells, Miami and Rome -- and now has a second French Open crown of her career.

The all-time longest unbeaten run on women's tour belongs to Martina Navratilova as she won 74 matches on the trot in 1984.

Robert Lewandowski
Get the latest updates on Fifa Worldcup 2022 and check out  Fifa World Cup Schedule, Stats and Live Cricket Score. Like us on Facebook or follow us on Twitter for more sports updates. You can also download the NDTV Cricket app for Android or iOS.