Nadal on Sunday celebrated his 32nd birthday in style as the World No. 1 trounced Richard Gasquet in his third-round match to enter last 16 at Roland Garros. 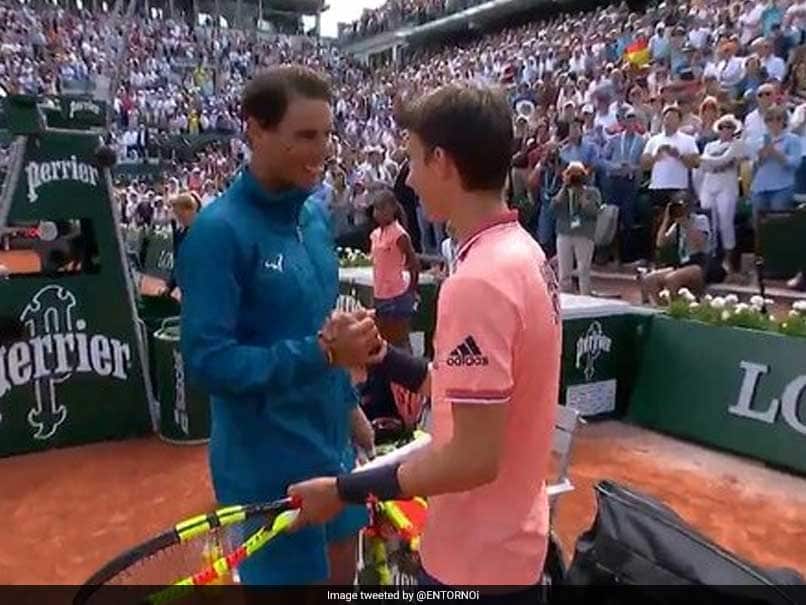 Tennis star Rafael Nadal is a role model for people all around the world. Nadal on Sunday celebrated his 32nd birthday in style as the World No. 1 trounced Richard Gasquet in his third-round match at the French Open. Rafael Nadal registered a 6-3, 6-2, 6-2 victory over the Frenchman to enter last 16 at Roland Garros. After Nadal's victory, the announcer requested the World No. 1 if he would play against a ball boy, who is an admirer of the tennis star.

"You have lots of fans all over the world but this ball boy is the biggest," the on-court presenter told Nadal.

"His dream is to play just one ball with you here at Roland-Garros. He's a little bit nervous so he might miss the first ball," she said.

Nadal smiled and agreed to greet the youngster. He took out a racquet from his bag and hand it over to the ball boy and asked him to take his position on court.

Every stroke from the young ball boy was cheered loudly by the crowd.

Nadal, who turns 32 on Sunday, continued his bid for an 11th French Open title and 17th major by brushing aside Gasquet.

He also took his run of consecutive completed sets at the French Open to 34, just seven shy of the record held by Bjorn Borg between 1979 and 1981.

Nadal, who lost only two points in the first five games, will next play Germany's world number 70 Maximilian Marterer.

Comments
Topics mentioned in this article
Rafael Nadal Richard Gasquet Tennis
Get the latest updates on Olympics 2020, Olympics 2020 Medal Tally, Live Cricket Score . Like us on Facebook or follow us on Twitter for more sports updates. You can also download the NDTV Cricket app for Android or iOS.