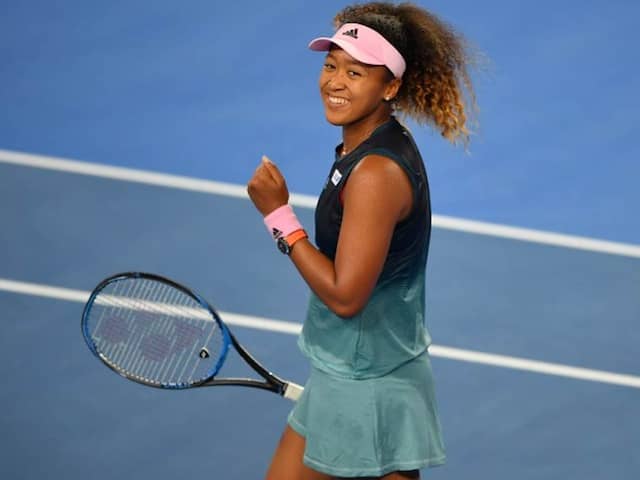 Japanese star Naomi Osaka is working hard on living up to the hype.© AFP

Japanese star Naomi Osaka surged into the Australian Open third round Thursday as she targets a second Grand Slam title, but it was a much harder task for countryman Kei Nishikori who fought through a draining five-set epic. In another titanic battle, Canadian Milos Raonic ousted 2014 champion Stan Wawrinka in four tightly-contested sets that all went to tie breaks. US Open champion and fourth seed Osaka swept past Slovenia's Tamara Zidansek 6-2, 6-4 with the roof closed on Margaret Court Arena after rain interrupted the opening major of the year.

The 21-year-old's breakthrough at Flushing Meadow over Serena Williams made her a new standard bearer for tennis in her homeland, Asia and the next generation of women, and she is working hard on living up to the hype.

"I thought I served alright, this was my first time playing her and I'm just happy to win to be honest," Osaka said after setting up a clash with Taiwan's Hsieh Su-wei.

"It was a tough match which could have gone both ways. He almost had it for sure," said the eighth seed, a three-time quarter-finalist at Melbourne Park, after falling to his knees in relief.

On Rod Laver Arena, 16th seed Raonic emerged the victor against Wawrinka, a three-time Grand Slam champion who is on the comeback trail from injury.

Raonic, who got to the Australian Open semi-finals in 2016 before losing to Andy Murray, will next face France's Pierre-Hugues Herbert who beat last year's semi-finalist Hyung Cheon of South Korea in four sets.

Despite being seeded six and seven respectively, neither Elina Svitolina or Karolina Pliskova has progressed further than the last eight at the Australian Open.

But self-assured Svitolina is bubbling with confidence after dismantling Viktoria Kuzmova 6-4, 6-1, while Pliskova woke up after losing the first set to race past Madison Brengle 4-6, 6-1, 6-0.

They were all in action ahead of 23-time major winner Williams who plays Eugenie Bouchard later, while six-time champion Novak Djokovic turns back the clock in a night match with Jo-Wilfried Tsonga on Rod Laver Arena.

World number one Simona Halep, who narrowly survived a first-round scare, is also back on court against American Sofia Kenin, who won the warm-up Hobart International and is on a six-match win streak.

Bookies have installed Osaka as second favourite to lift the title after Williams, who in her first tour match since losing the US Open final delivered an ominous warning in a 49-minute opening round thrashing of Tatjana Maria.

Next in the firing line is Canadian Bouchard.

Williams, who is bidding to match Margaret Court's record of 24 Grand Slam crowns on her first return to Melbourne Park since winning in 2017, cited her consistency and few unforced errors as key takeaways from her first round outing.

Despite 2014 Wimbledon finalist Bouchard slipping down the rankings to 79, she said she was not taking her lightly.

"She does everything well, and I really like that she doesn't quit," she said.

Djokovic, gunning for a record seventh title, has a fairytale meeting with Frenchman Tsonga in a rematch of their 2008 final that the Serb won.

Comments
Topics mentioned in this article
Milos Raonic Kei Nishikori Tennis
Get the latest Cricket news, check out the India cricket schedule, Cricket live score . Like us on Facebook or follow us on Twitter for more sports updates. You can also download the NDTV Cricket app for Android or iOS.