A Tournament Intent on Leading the World in Pampering Players

From berries and sushis to exquisite salons and awe-inspiring plunge pools, Australian Open has one of the world's best facilities in line for competing players

Written by Gardiner Harris, The New York Times
Read Time : 5-min
Gidget Ricca styles the hair of Klaudia Jans-Ignacik in the players-only salon on the grounds of the Australian Open in Melbourne. Ricca, who has worked here for some 17 years, inspires fierce loyalty among many tour pros Â all part of the pampering that makes the Australian Open a favorite for many tennis players. © NYT

For decades, professional tennis players struggled with tournament organizers to get more money and better services, and while that battle is far from over, the level of player pampering at the Australian Open suggests a historic victory.

The cafeteria has had goji berries, chia seeds and an endless supply of fresh sushi. The child-care center has had an entire staff care for a minor boom of player babies. The salon had free hair-waxing treatments, even for the men.

Now, with the planned construction of a $100 million center for player services next to Rod Laver Arena - a stadium named after a man banished for years from the Open because he insisted on being paid - far more is in the offing, including his-and-her hot-and-cold plunge pools, outdoor and indoor player lounges and high-tech locker rooms stuffed with rounded couches and flat-screen TVs.

Tom Larner, director of facilities for the Open, said the building was part of a years-long effort to improve players' lives, an effort that includes doubling the prize money to $32 million this year from $16 million in 2007; stipends for travel, accommodation and food expenses; and, this year, free racket stringing.

The tournament built a tennis training site in the first phase of an $800 million government-funded redevelopment of Melbourne Park. A golf-cart ride from the Laver arena, the training center has eight indoor and five outdoor hardcourts, eight outdoor clay courts and a vast gym that players describe with awe. The new building, part of the second phase of construction, is expected to be completed as soon as 2017.

"Maybe because it's so far for most of us, the Australian Open is more welcoming than any other tournament in the world," said Eric Butorac, president of the ATP's Player Council. "It's awesome here."

The queen of player pampering at the Australian Open is Gidget Ricca, a blonde with a jeweler's eyes and a bartender's ears who has presided over the players-only salon for 17 years. Ensconced in a room with white couches, a shag rug and glass tables, Ricca bathes every client in a soothing ripple of advice and compliments.

While she happily cuts players' hair to suit their tastes, she gently nudges most toward styles as bold as their forehands.

"The American girls prefer to have their hair long and bouncy; they like big hair," Ricca said, barely hiding her disappointment. "The Nordic girls are happy to wear it straight and blond and simple. The British girls are more out there, and the French are, too. They want something fabulous and different."

Her signature creation this year was the sculpted mini-Mohawk with a "Z" cut into the side that she styled for Nick Kyrgios, the 19-year-old Australian whose run to the quarterfinals has been the tournament's emotional highlight. After the cut, Kyrgios asked for a notch in one of his eyebrows, Ricca said.

"And so we did one line in the middle," she said. "And I said, 'It looks like there's been an accident.' So we did another, and he loved it." 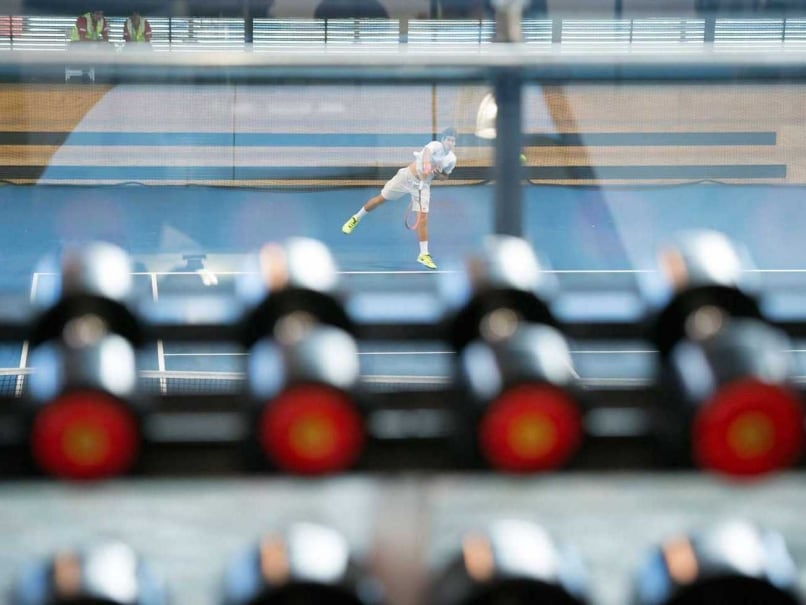 A modern gym, one tour tennis players speak with in awe, overlooks training courts on the grounds of the Australian Open. No expense is spared here to improve players lives, with everything from his-and-hers hot-and-cold plunge pools and free racket stringing to a players-only hair salon and a concessionary that stays on top of every tour diet craze.

The tournament's child care center was once a small room with a single attendant. But as the average age of players has increased, so has the number of children on the tour. The present room, intended to provide only two to four hours of baby-sitting while parents play, is 1,300 square feet, and it will be expanded in the new building.

"We used to have one or two kids in there at a time at most," Gracie Constanzo, tournament service director, said last weekend. "Yesterday, we had 16 kids."

Just down the hall from Ricca's beauty salon under the Laver arena is a players' cafeteria, where Markus Werner, the tournament's lead chef, has undertaken a different kind of pampering. With amenities including a juice bar with offerings like "mean green" and "beet zing" and an almost around-the-clock sushi bar, Werner tries to stay ahead of every player diet craze.

Three years ago, the most popular offerings were gluten-free after Djokovic became the world's top player following such a diet. This year, the gluten-free and quinoa fads have been replaced by chia seeds, goji berries, pork and sushi, Werner said.

"Three years ago, we started doing fresh sushi and served about 100 rolls a day," Werner said. "Now, we're doing 400 rolls a day and I have two Japanese ladies rolling nonstop. Five years ago, we didn't even serve pork. Now, I can't get pork bellies in here fast enough."

The Australian Open is also taking special care to make it easier to arrive and leave. Three years ago, Tennis Australia began adding travel grants and raising per-diem expenses for all players - financial perks intended to help the low-ranked players and early-round losers the most.

A new study, financed partly by the International Tennis Federation and Tennis Australia, tracked more than 2,000 players who made prize money in 2013 and found that only about 150 women and 160 men made enough to cover their expenses.

This year, the travel stipends total about $1,088,000, with $1,979 going to each player, including qualifiers. Each receives $300 per night for a hotel and $60 per day for meals. Tournament officials said the stipends and per diems were expected to rise next year.

"We said to the players, by the time we hit 2016, we're going to take all your costs away," said Craig Tiley, the tournament director.

To save players airline booking and flight change fees, Tiley formed a unit to operate an around-the-clock travel service.

To save players on taxes, another unit advises them on deductible expenses, helps them fill out forms and issues paychecks promptly with taxes already withheld.

The new building will have a hotel-like lobby for these and other concierge services. The French Open, Wimbledon and the U.S. Open pay roughly comparable per-diem expenses for hotels and meals, but none have chosen to match the travel grant.

But the inspiration for the new building came less from competing tennis facilities, since none come close to what is planned here, than those for rock and pop singers, who use the Laver arena for concerts for much of the year. In several interviews, Larner, the director of facilities, referred to the recipients of the Open's largesse as "artists" instead of "players."

"I like calling them artists," Larner said. "Have you seen what they can do with those rackets?"