T20 World Cup: One of the standout moments of Zimbabwe's disciplined effort on the field was a spectacular catch taken by Wesley Madhevere to dismiss Scotland's Matthew Cross. 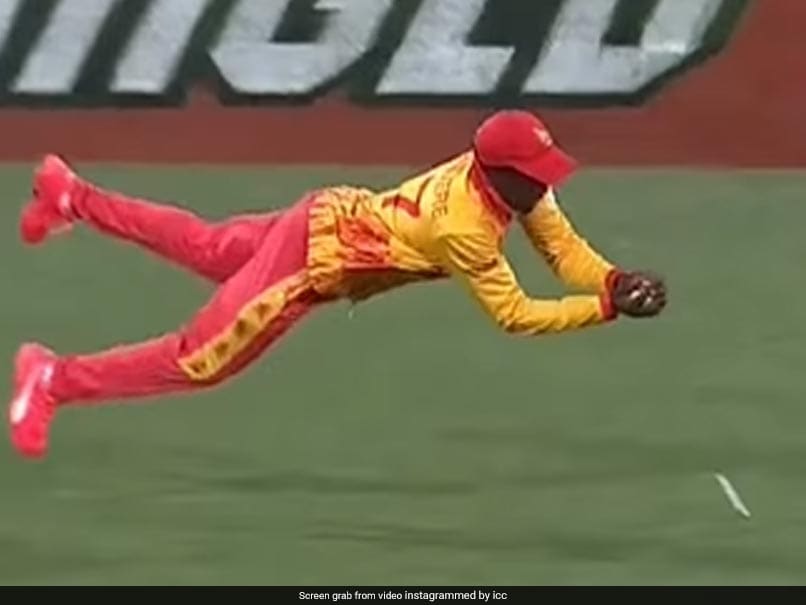 Zimbabwe on Friday defeated Scotland by 5 wickets to become the second team from group B to qualify for the Super12 stage of the ongoing ICC T20 World Cup. Scotland opted to bat first at Hobart and despite opener George Munsey anchoring the innings with a knock of 54, the other batters failed to rally around as the Scots managed to post a total of 132/6 in their 20 overs. The total was overhauled by the Zimbabweans easily with 9 balls to spare.

One of the standout moments of Zimbabwe's disciplined effort on the field was a spectacular catch taken by Wesley Madhevere to dismiss Scotland's Matthew Cross.

The ICC posted the video of the catch on its Instagram handles with the caption "Superman or Wesley Madhevere?"

Zimbabwe joined the likes of India, Pakistan, South Africa, Bangladesh and Netherlands in Group 2 of the Super 12 stage.

The other team to qualify from the group is Ireland, who will join Group 1 in Super12 stage.

Zimbabwe Cricket Team ICC T20 World Cup 2022 Wesley Madhevere Cricket
Get the latest updates on IPL Auction 2023 and check out  IPL 2023 and Live Cricket Score. Like us on Facebook or follow us on Twitter for more sports updates. You can also download the NDTV Cricket app for Android or iOS.