New Zealand became the first team to qualify for the semifinals, having defeated Ireland by a comprehensive margin earlier on Friday

Australia kept their hopes of reaching the T20 World Cup semi-finals alive after beating Afghanistan in their final group game on Friday at the Adelaide Oval. Glenn Maxwell's unbeaten 32-ball 54 lifted Australia to 168/8 in the face of an effervescent Afghan bowling attack. Despite Rashid Khan's unbeaten 48 off 23 balls, Afghanistan fell short of the total by four runs. Australia's chances of reaching the semifinals, however, aren't in their hands as England have better net run-rate, and face Sri Lanka in Sydney on Saturday.

Australia needed to score 180+ plus against Afghanistan, but couldn't do so.

The Blackcaps became the first team to qualify for the semifinals, having defeated Ireland by a comprehensive margin earlier on Friday.

Australia, following their win over Afghanistan, sit second with as many points. However, they have a negative net run-rate.

England are third with five points and a game in hand.

Sri Lanka are out of the semi-finals, but could spoil the party for England. They have won four points from four games so far.

Afghanistan, too, bowed out of the tournament without a win and two washouts.

Here's how the updated Group 1 Points Table looks like: 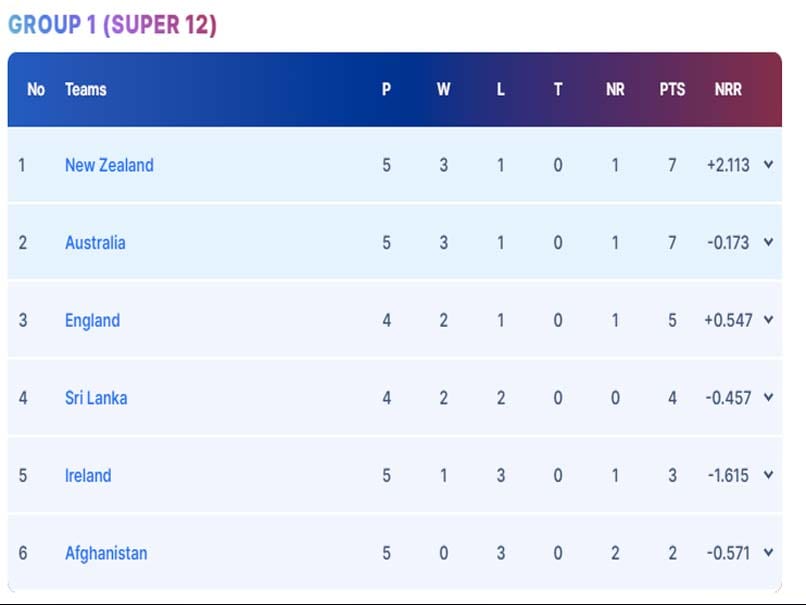 Following their defeat to Australia, Mohammad Nabi announced that he has decided to step down as captain of Afghanistan.

Never Be Satisfied, Stay Hungry: Sania Mirza To Gen Next
Comments
Topics mentioned in this article

Ireland Cricket Team ICC T20 World Cup 2022 Cricket
Get the latest updates on IPL Auction 2023 and check out  IPL 2023 and Live Cricket Score. Like us on Facebook or follow us on Twitter for more sports updates. You can also download the NDTV Cricket app for Android or iOS.