After the conclusion of the match, Twitter was flooded with reactions on India's humiliating defeat at the hands of England 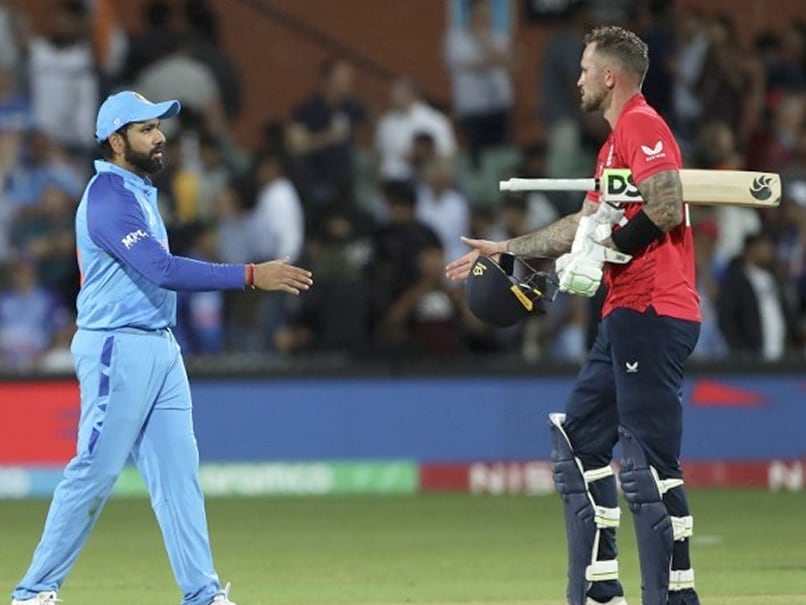 England will now take on Pakistan in the summit clash in Melbourne on Sunday.© AFP

England, on Thursday, reached the final of the T20 World Cup after thrashing India by 10 wickets in the semi-final at the Adelaide Oval. Chasing a target of 169, openers Jos Buttler and Alex Hales smashed unbeaten fifties to take England home with four overs to spare. Hales was named 'Player of the Match' for his 47-ball 86 not out while Buttler also remained unbeaten on 80 off 49 balls. Earlier, Hardik Pandya (63) and Virat Kohli (50) hit fifties to take India to a competitive total of 168/6.

After the conclusion of the match, Twitter was flooded with reactions to India's humiliating defeat at the hands of England.

What an incredible performance England @ECB_cricket @CTurnerFCDO A semi-final turned into a no-contest, stunning batting that India had no answers to - brilliant batting @AlexHales1 @josbuttler . We head to MCG - England vs Pakistan !! #HopeNotOut #ICCT20WorldCup2022

Congratulations to England. First over of England innings Buttler took on Bhuvi a match up well in Indias favour, the risk paid off and India could not counteract. Small moments in a World Cups set's up success. #INDvENG #T20WorldCup

Alex Hales ... redemption.. it just shows if you stick at it , you can come back after adversity

A serious statement from @englandcricket this is. Win by 10 wickets with 24 balls left. #wow

England played out of their skin to win a place in the finals. Better luck next time Team India. #IndvsEng pic.twitter.com/PAUPkF4mgC

Absolutely Wonderful Partnership Between @josbuttler and @AlexHales1 Great bowling by Adil..Hard Luck india.Hardik and virat's inning was superb but unfortunately couldn't make it to the final..#INDvsENG #T20WorldCup

England will now take on Pakistan, who defeated New Zealand in the first semi-final on Wednesday, in the summit clash in Melbourne on Sunday.

Notably, England were earlier beaten by Ireland in the Group Stage, which had raised doubts over their hopes of reaching the semi-final.

Speaking of that defeat, England captain Buttler said that the team has shown great characted to come this far in the tournament.

"That feels a long time ago now," said Buttler.

"The character we've shown to get through the tournament since then, and put in our best performance today, has been amazing."

Hardik Pandya ICC T20 World Cup 2022 India vs England, 2nd Semi-Final Cricket
Get the latest updates on IPL Auction 2023 and check out  IPL 2023 and Live Cricket Score. Like us on Facebook or follow us on Twitter for more sports updates. You can also download the NDTV Cricket app for Android or iOS.