Chris Froome and 175 other riders set off on the first stage of the 2018 Tour de France. 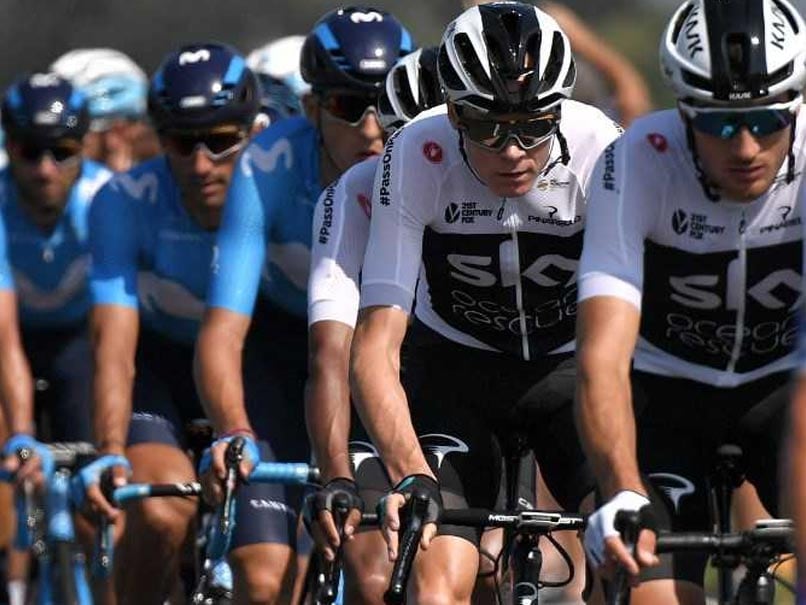 Chris Froome is one of the favourites to win Tour de France 2018.© AFP

Chris Froome, bidding for a record-equalling fifth title, and 175 other riders set off on the first stage of the 2018 Tour de France on Saturday from the island of Noirmoutier off the Atlantic coast. Cycling fans packed the roadsides of the 201km (125-mile) ride to Fontenay-le-Comte, the stage looking certain to end with a sprint finish around 1400 GMT. There was a festive family atmosphere on the mainly coastal route, which was well marshalled by a massive police presence that organisers hope will deter fans targeting Froome, who was only cleared to race last week after long-running suspicions of doping were put to bed.

The 105th edition of cycling's greatest race set off from the picturesque Atlantic island of Noirmoutier, connected to the mainland by an enormous road bridge.

The peloton of 22 teams of eight riders will then race along the windswept coastline famous for attracting vast crowds of yachting enthusiasts for the Vendee Globe around-the-world race that also sets off there.

Team Sky's Froome, his fellow riders and the organisers are all reeling from the tempestuous run-up to the Tour, which culminated on Thursday with the four-time winner being roundly booed at the official presentation.

The 33-year-old Kenyan-born Briton went as far as appealing for understanding and belief from the French public in the pages of newspaper Le Monde on Friday.

The hope is that once it starts, the focus will switch to interest in the race, and Saturday's run along the coast will prove or disprove that idea.

The stage is expected to culminate in a sprint finish, with Briton Mark Cavendish targeting a 31st stage win, but winds are expected and a surprise may be in store.

"Sprinters will be advised to stay near the front if they don't want to be caught cold," said race designer Thierry Gouvenou.

The winner gets 10 bonus seconds and will have the honour of pulling on one of the greatest prizes in cycling, the overall leader's yellow jersey, with Germany's Marcel Kittel the bookies' favourite.

The first nine days of racing take in the West and North of France with Monday's 35.5km team time-trial setting the agenda.

There are three other clearly difficult stages in this section, with 10 hills on the road to Brittany town Quimper on Wednesday and two ascents of the feared Mur de Bretagne climb the day after.

July 15 is World Cup final day with the stage set to finish 30 minutes before the big kick-off in Moscow.

That day the Tour traces the old cobbled mining roads of the north-east from the war memorial at Arras to Roubaix.

The peloton will then hop on flights to the Alpine town of Annecy, where Froome, the great French hope Romain Bardet, 2014 champion Vincenzo Nibali and the other climb specialists will start to plot each other's downfall.

Many of France's great mountains feature, such as the Alpe d'Huez and the Col du Tourmalet.

But the two key challenges are a brutal, uphill 31km individual time trial and a short, sharp shock of a 17th stage with just 65km, featuring 25km of hair-raising descents and 38km of climbs to a summit finish at the Col de Portet in the southwest.

Froome is out to join five-time winners Bernard Hinault, Jacques Anquetil, Eddy Merckx and Miguel Indurain and a win would also give him the first Giro-Tour double for twenty years.