2018 Asian Para Games: Love The Transition Because It Is Survival Of The Fittest, Says Deepa Malik

Deepa Malik won a bronze medal in the javelin throw in the Combined F53/54 category in the ongoing third edition of the Para Asian Games. 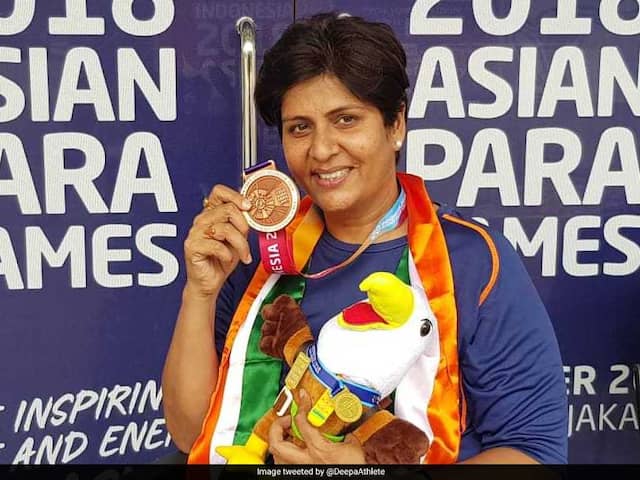 Indian para-athlete Deepa Malik has been juggling between various categories of para games, including shot put, javelin throw and discus throw but the celebrated athlete claims that she is in love with the transition as 'it is survival of the fittest'. Deepa Malik, who won a bronze medal in the javelin throw in the Combined F53/54 category in the ongoing third edition of the Para Asian Games, said that she is not done yet as a medal in disc throw event is yet to be clinched.

"I love the transition because it is the survival of the fittest," Deepa Malik told ANI.

"My discus throw event (at the ongoing Para Asian Games) is still left. I am taking up the challenge. It would be very interesting to note how quickly I adapt to new events. You have to learn new skills. Let's wait and watch how I perform," she said.

Deepa Malik had taken up the discus throw challenge very recently but, fighting against all odds, she had top-scored in the Asia Ranking 53 category in her first ever attempt in the event.

She had also secured a second place in the Asian Games combined category event 51/52/53 of the 2018 World Para Athletics Grand Prix.

Reflecting on her bronze medal victory in the javelin throw, the Arjuna Awardee athlete said that she is happy with her performance as she has seen herself improving, over the years.

She further stated that the bronze is special because the games were played under RAZA system (A system where a more differently-abled athlete may beat a lesser differently-abled competitor with a slightly shorter throw or jump), which made them compete at the world level.

"Bronze medal came under RAZA system. It was no longer an Asian Game. We are playing at the world level. Your points were calculated at world level, not Asian Level. I am very happy that I stood third in such a tough competition. In my own category, I improved my record," Deepa Malik said.

She dedicated her 2018 Para Asian Games bronze medal to her late father, adding that if she went on to win Discus Throw event, which is slated to be held on October 12, that victory would also be dedicated to her father.

When asked whether she has set her eyes on 2020 Paralympics Games, the athlete said that she would be working hard as discus throw is something new for her.

"I would definitely like to learn but mastering it......let's see," she concluded.