Vijay Shankar was promoted up the order but failed to deliver. 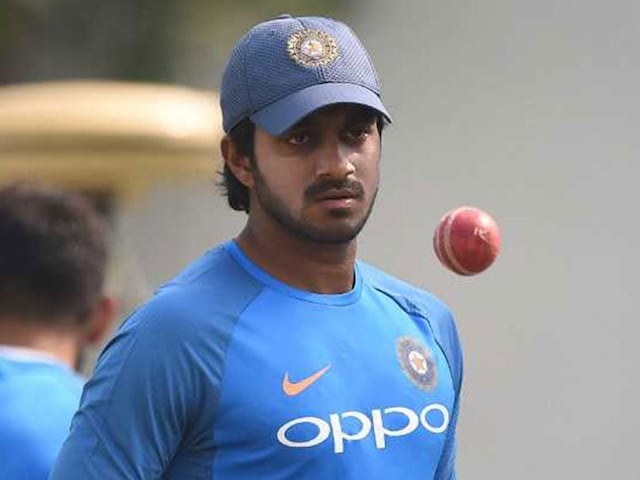 Vijay Shankar came into bat ahead of Dinesh Karthik but struggled with the bat in the final.© AFP

Dinesh Karthik's heroic innings helped India beat Bangladesh by four wickets in the final and clinch the Nidahas Trophy title on Sunday. Karthik broke Bangladeshi hearts when he smashed Soumya Sarkar for a last-ball six. A wave of jubilation swept across India as Karthik did the unthinkable. However, amid the revelry, there was some anger among the Indian fans with one cricketer in particular facing the wrath of Twitter users. Fans berated Vijay Shankar for his sluggish innings in the final that almost cost India the match.

Shankar was sent into bat ahead of Karthik but struggled big-time, managing to score 17 off 19 balls before being dismissed on the penultimate ball of the match.

Where did this guy Vijay Shankar land from, Mars. I could bat better.

Jeet to Gaye.. But Vijay Shankar needs this asap pic.twitter.com/1uOkSnUOlF

How did this Vijay Shankar guy make his way in Indian team? He's gully level cricketer

Vijay Shankar should immediately be barred from any level of cricket asap. At the most he should play tennis ball cricket

Vijay Shankar is the reason why people vote for NOTA

Chasing 167 for victory, India found themselves in a spot of bother early on as Shikhar Dhawan (10) and Suresh Raina (0) fell before the fourth over. Stand-in skipper Rohit Sharma and KL Rahul strung together a crucial 51-run stand to bring India back into the contest.

While Rahul was dismissed for 24, Rohit went on to score his 14th T20I half-century. However, Rohit failed to kick on from there and fell to Nazmul Islam for 56.

Surprisingly, the Indian team management decided to send Vijay Shankar ahead of Karthik and that didn't work to India's advantage.

He struggled and his sluggish innings left India in heaps of trouble. Vijay Shankar had numerous swings and misses, and his poor timing meant he could not get boundaries they so desperately needed.

Karthik, who came at No.7, immediately hit the ground running. Needing five runs off the last ball, Karthik did the unthinkable sending fans and his teammates into a frenzy.

Comments
Topics mentioned in this article
India Cricket Team Bangladesh Cricket Team Vijay Shankar Dinesh Karthik Nidahas T20 Tri-Series Cricket
Get the latest Cricket news, check out the India cricket schedule, Cricket live score . Like us on Facebook or follow us on Twitter for more sports updates. You can also download the NDTV Cricket app for Android or iOS.