Nidahas Final Was An Off Day But I'm Finding It Difficult To Forget, Says Vijay Shankar

Vijay Shankar was promoted ahead of eventual match-winner Dinesh Karthik but struggled to score quickly. 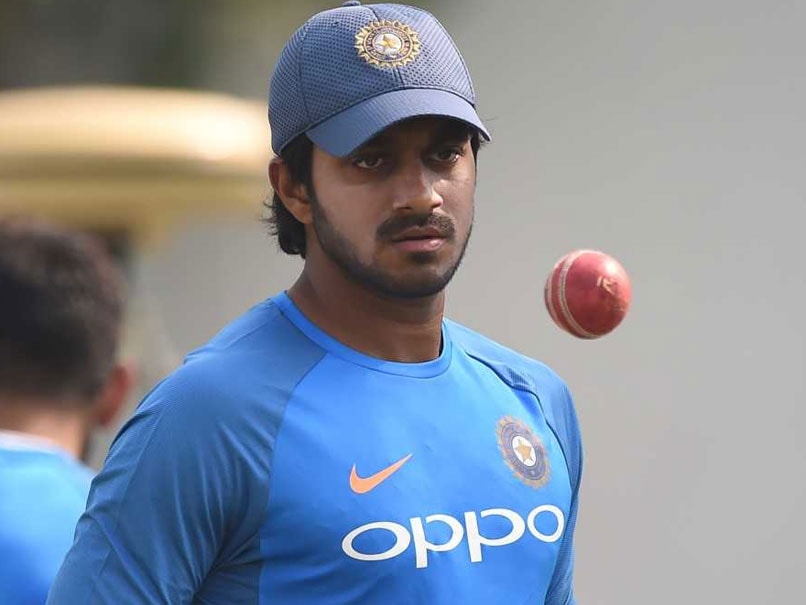 All-rounder Vijay Shankar admitted that he was trying to move on from a disheartening off day that nearly cost India the Nidahas Trophyfinal against Bangladesh. While Dinesh Karthik became the toast of the nation with a last-ball six in India's triumph over the South Asian rivals, the 27-year-old Shankar was lambasted for his 19-ball-17 that included four successive dot balls in the 18th over. "My parents and close friends didn't say anything as they knew what I was going through. But I get these text messages like 'don't worry about what's being said on social media', when I actually I want to move on. They perhaps think that's the way to show sympathy but it may not work," the all-rounder said.

For him, the final was an off-day that marred a good tournament in which he turned in decent figures with the ball.

"It was an off-day for me but I am finding it difficult to forget. I know I need to move on. I had a good tournament until that final day," the soft-spoken Shankar said told news agency PTI.

The Chennai player was practical when asked about being pilloried on social media.

"I need to accept that these are things that can happen when you play for India. The same social media would have gone berserk had I won the match all by myself.

"It happened the opposite and I have to accept all the brickbats. That's also a part of growing up," Shankar replied calmly.

There are times when getting out for a duck in a close encounter allows someone to go under the radar but Shankar doesn't want any safe passage while trying to chart his own destiny.

"Had I got out for a second or a third ball duck, no one would have bothered about my performance. But then would I have liked that to happen? Certainly not. I would rather accept this situation.

"You just can't think of safe options always. You have to accept challenges head on," Shankar said.

But he does accept that it was a missed opportunity to become a hero in a tricky chase.

"When everyone was rejoicing after the final, I was feeling very disheartened at how things panned out. It was an opportunity given to me to become a hero. I should have finished the match," he said.

"Everyone in the team, including my captain (Rohit Sharma) and coach (Ravi Shastri), told me that it can even happen with the best and I shouldn't feel bad," he said.

Asked about the mistake that he made, Shankar pointed to his attempts to go for big hits rather than rotating the strike.

"If you take a look at my batting in the Syed Mushtaq Ali or Vijay Hazare Trophy, I don't play so many dot balls. I rotate the strike but Mustafizur (Rahman) really bowled well during that over," he said.

While everyone spoke about the dot balls, hardly anyone noticed his boundary bisecting the point and short third man, which made it easy for Karthik to launch a final assault.

"DK just told me one thing -- hold your shape (in cricketing parlance maintaining the balance in one's stance) and hit a boundary. That ball from Soumya, I was trying to just put bat on ball," he said.

In the Indian team, opportunities are few but Shankar is not worried about the fact that primarily he is being seen as Hardik Pandya's cover.

"The selection thing is not my concern. The positive part is that IPL is starting in two weeks' time and my focus is now to do well for Delhi Daredevils," said Shankar, who would like to pick chief coach Ricky Ponting's brains.

Comments
Topics mentioned in this article
India Cricket Team Vijay Shankar Nidahas T20 Tri-Series Dinesh Karthik Cricket
Get the latest updates on Fifa Worldcup 2022 and check out  Fifa World Cup Schedule, Stats and Live Cricket Score. Like us on Facebook or follow us on Twitter for more sports updates. You can also download the NDTV Cricket app for Android or iOS.