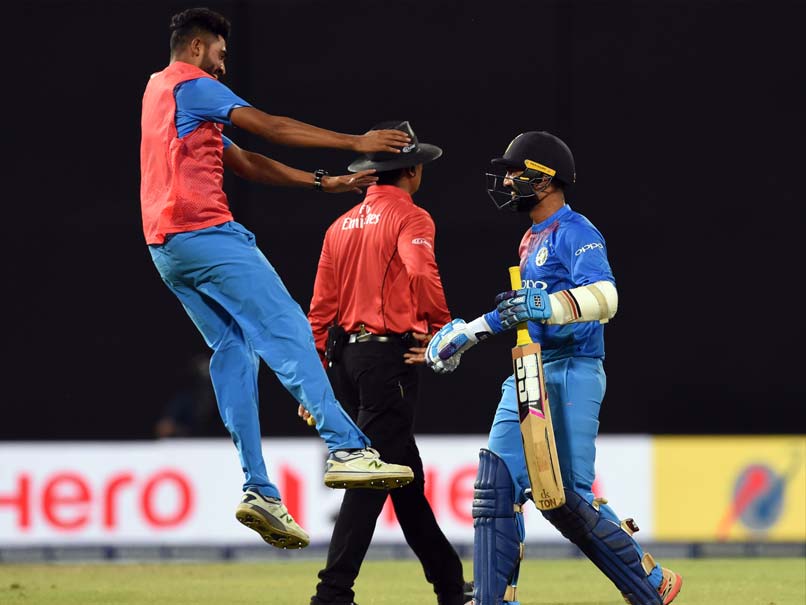 Dinesh Karthik refused to throw in the towel and produced one of the best knocks of his career.© AFP

Dinesh Karthik refused to throw in the towel and produced one of the best knocks of his career to blast 29 off 8 balls as India beat Bangladesh by four wickets to win the Nidahas Trophy final in Colombo on Sunday. Needing five runs off the last ball, Karthik hit a flat-bat six over extra cover to keep India's T20I record against Bangladesh intact. Karthik, with his aggressive yet composed batting, turned the match on its head when he walked out to bat after Manish Pandey's fall and hit two sixes and as many fours in the 19th over to add vital 22 runs to India's score.

Earlier, Rohit Sharma won the toss and chose to bowl first. Riding on the back of a well-made half-century from Sabbir Rahman, Bangladesh put up a total of 166/8 in their quota of 20 overs.

Rohit kept the scoring rate high and along with KL Rahul as the duo put on 51 runs for the third wicket in six overs to keep India in the hunt.

In the end, India managed to score 168/6, courtesy skipper Rohit's 14th T20I ton and a composed finish from Dinesh Karthik.

Comments
Topics mentioned in this article
India Cricket Team Bangladesh Cricket Team Dinesh Karthik Cricket Nidahas T20 Tri-Series
Get the latest updates on IPL 2021, check out the IPL 2021 Schedule and Indian Premier League Live Score . Like us on Facebook or follow us on Twitter for more sports updates. You can also download the NDTV Cricket app for Android or iOS.