IPL 2022: Prithvi Shaw said he has been admitted to a hospital and is recovering from fever. 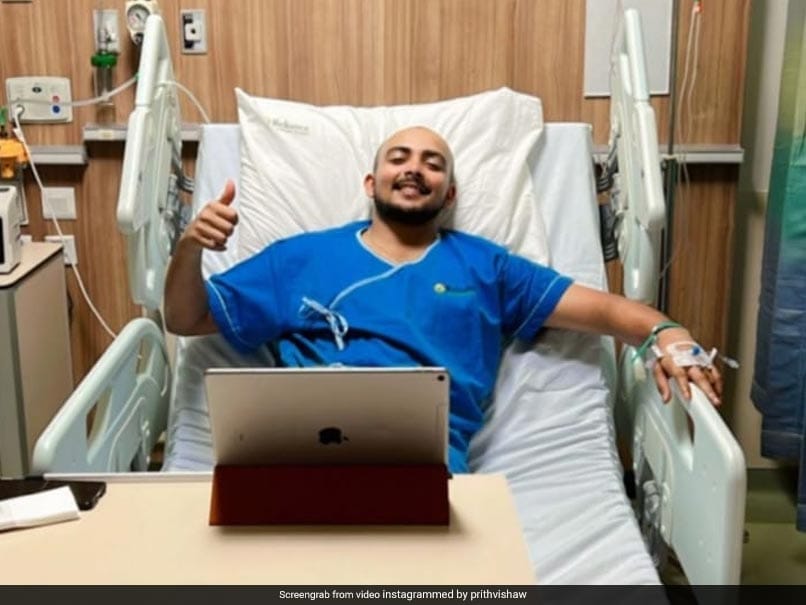 Prithvi Shaw shared a picture from his hospital room.© Instagram

Prithvi Shaw, who was not in the team for Delhi Capitals' last match against SunRisers Hyderabad in IPL 2022, took to social media today to reveal that he is admitted to a hospital and recovering from fever. Shaw shared a picture from his hospital room on his Instagram stories and wrote "Admitted in hospital & recovering from fever. Thank u all for your good wishes. Will be back in action soon." Shaw is set to miss out on their next match against Chennai Super Kings on Sunday.

Prithvi Shaw shared an update on his health on Instagram stories.

"Prithvi is currently recovering well in a Mumbai hospital. He had to be admitted as he was running high temperature but his RT-PCR test turned out to be negative," news agency PTI quoted a senior BCCI official as saying.

"The hospital where he has been admitted is a non-COVID one," the source reportedly said.

Mandeep Singh opened the batting with David Warner in Shaw's absence against SRH but fell for a duck.

But a brilliant unbeaten 58-ball 92 and a devastating 35-ball 67* from Rovman Powell powered DC to 207/3 at the Brabourne Stadium and they then restricted SRH to 186/8 to register a 21-run win that saw them move up to fifth on the IPL 2022 points table.

Delhi have won five of their 10 matches so far and will be looking to go on a strong run to finish the league stage on a high and reach the playoffs.

Shaw, meanwhile, has helped give DC some quick starts, but has not really been able to convert his own starts into big scores this season.

He has scored 259 runs from nine matches at a strike rate of 159.88, including two half-centuries.

DC will hope for his quick return, as his opening partnership with David Warner is a key part of their batting lineup.

DC have struggled with COVID-19 throughout the tournament. Mitchell Marsh and Tim Seifert had earlier tested positive, along with four support staff members.

They have recovered now, but on Sunday, reports said that the players went into isolation again after a net bowler tested positive for COVID-19.

As per the IPL protocol, Delhi Capitals will have to undergo another round of testing and till then all members will have to be isolated in their rooms.

Delhi Capitals Prithvi Shaw Cricket
Get the latest updates on ICC T20 Worldcup 2022, check out the Schedule and Live Score. Like us on Facebook or follow us on Twitter for more sports updates. You can also download the NDTV Cricket app for Android or iOS.