IPL 2022: Rishabh Pant completed the easiest of run-outs after a mix-up between Arshdeep Singh and Vaibhav Arora. 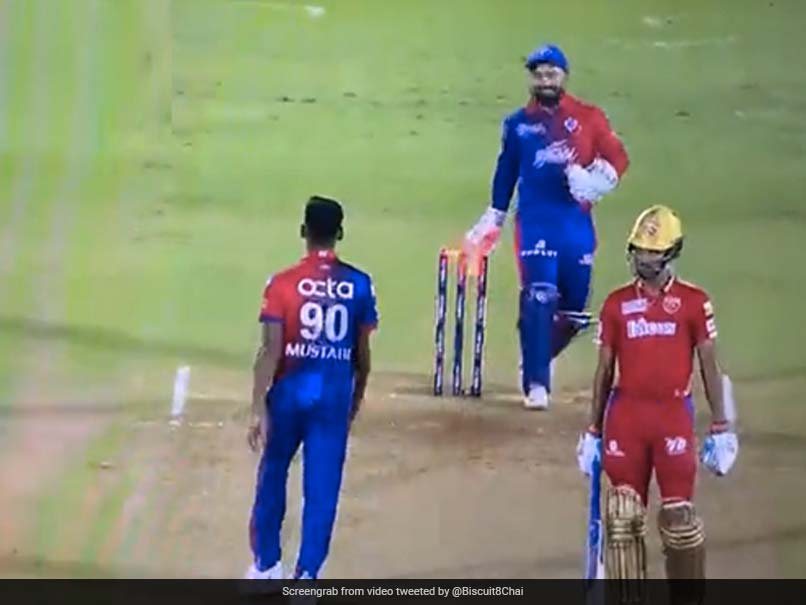 IPL 2022: Rishabh Pant had a sheepish grin as he ran Arshdeep Singh out.© Twitter

Delhi Capitals shrugged off a Covid outbreak in their camp as they defeated Punjab Kings by 9 wickets in Match 32 of Indian Premier League (IPL) 2022 at the Brabourne Stadium in Mumbai. It was an all-round performance from DC, led by the bowlers, who did half of the job by restricting PBKS to a total of 115 after skipper Rishabh Pant elected to bowl first. Punjab kept losing wickets from the start, but managed to hold on till the final ball of the innings, thanks largely to Arshdeep Singh.

Arshdeep, however, was involved in a hilarious incident on the last ball of the PBKS.

After hitting Mustafizur Rahman for a boundary in the second ball , PBKS failed to collect anything else from the over.

Arshdeep did try to steal a bye off the final delivery, but Vaibhav Arora turned him down, leaving the former with a "brain fade" look on his face as he gave up and didn't try to get back to the crease.

Someone please define this pic.twitter.com/cXLlrCUCsY

Pant, meanwhile, collected the ball, charged towards the stump and dislodged the bails, grinning sheepishly.

Chasing a target of 116, DC managed to cross the line with nine wickets and 57 balls remaining in their bag.

Prithvi Shaw and David Warner took the game to the PBKS bowlers, smashing 81 runs in the powerplay.

Rahul Chahar though did manage to snag Shaw's wicket in the next over, but it was nothing more than a consolation for them.

Warner ended the game with an unbeaten 60, while Sarfaraz Khan also remained unbeaten on 12.

With the win, DC moved to the sixth spot in the points. They will now face Rajasthan Royals at the Wankhede Stadium on Friday, April 22.

Mustafizur Rahman Vaibhav Arora Cricket
Get the latest updates on ICC T20 Worldcup 2022 and CWG 2022 check out the Schedule, Live Score and Medals Tally. Like us on Facebook or follow us on Twitter for more sports updates. You can also download the NDTV Cricket app for Android or iOS.