Watch: Deepak Chahar's CSK Teammates, Led By MS Dhoni, Did This After He Proposed To Girlfriend

Deepak Chahar and his fiancee returned to the team hotel and cut a cake together even as his teammates circled around him, ready to pounce. 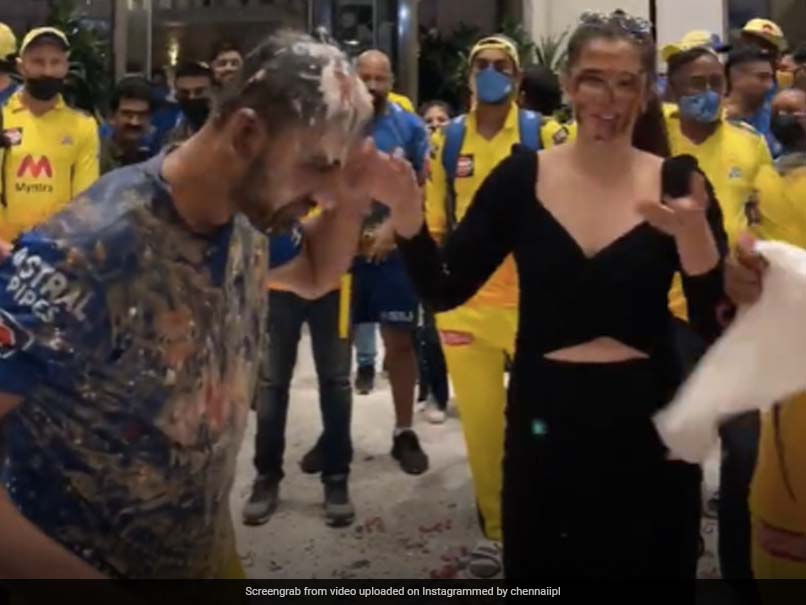 Deepak Chahar was left in a complete mess by his CSK teammates.© Instagram

Deepak Chahar proposed to his girlfriend after Chennai Super Kings' final league match in the Indian Premier League (IPL) 2021 season on Thursday. CSK might have lost the match, nonetheless it was a joyous moment for the CSK pacer and all his teammates. Chahar got down on one knee in the stands at the Dubai International Cricket Stadium, taking his girlfriend completely by surprise. The celebrations continued after Chahar along with his girlfriend and the entire CSK contingent returned to the team hotel.

Chahar and his fiancee returned to the team hotel and cut a cake together even as his teammates circled around him, ready to pounce. As soon as the pair cut the cake, CSK skipper MS Dhoni took hold of Chahar from behind, while Krishnappa Gowtham got hold of his legs as the likes of Suresh Raina, Ravindra Jadeja, Robin Uthappa and others plastered him with cake and some other substance they brought with them in a bottle.

After the mayhem, Dhoni and other CSK stars made a quick exit while Chahar sat on the floor in the mess created by his teammates.

The entire episode made for great viewing with fans loving every bit of the video posted on Chennai Super Kings' official Instagram handle.

While CSK players seemed in high spirits during the joyous celebrations, they will need to quickly focus on on-field matters. After being the team to beat in the UAE leg, CSK have suddenly lost their three previous matches and end the league stage on 18 points with nine wins and five losses from 14 matches.

CSK will need to get their act together going into the playoffs. Ruturaj Gaikwad and Faf du Plessis have starred for CSK with the bat, but aside from Ambati Rayudu, the middle-order batters haven't really made big contributions.

The bowling also looked below par in the previous match against Punjab Kings with KL Rahul running riot.

Dhoni and the team management will be hoping the team returns to its best during the playoffs.

Ravindra Jadeja IPL 2021 Cricket
Get the latest updates on ICC T20 Worldcup 2022, check out the Schedule and Live Score. Like us on Facebook or follow us on Twitter for more sports updates. You can also download the NDTV Cricket app for Android or iOS.