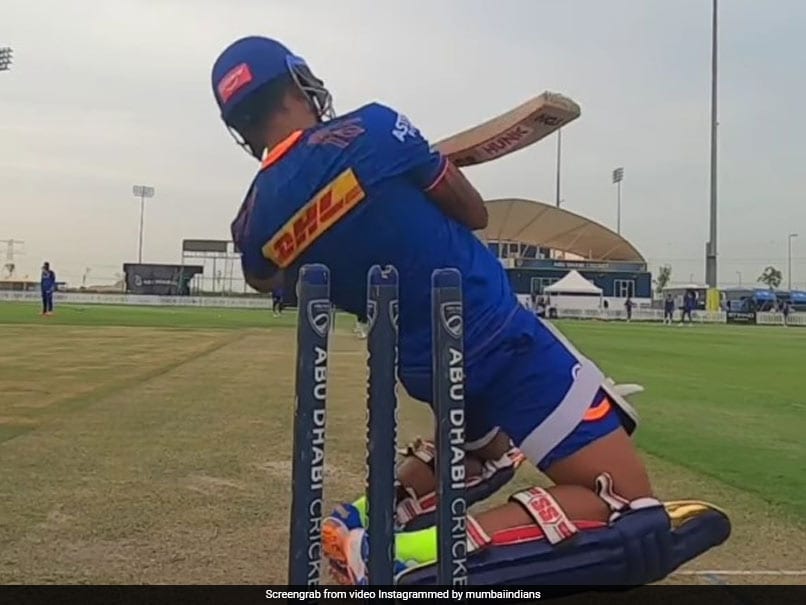 Spirits are sky-high in the Mumbai Indians (MI) camp after the thumping victory in their last game against Rajasthan Royals. Before their next and final game of the league stage, MI have shared a practice video of Suryakumar Yadavaka SKY playing an uppercut to a superfast short delivery. The clip was shared on Instagram with the caption, "Magic's in the Sky." While MI fans praised the shot, they also want the middle-order star to emulate the same in their upcoming fixture against Sunrisers Hyderabad.

The clip was also shared on Twitter by the Mumbai-based franchise. And, fans simply couldn't keep calm.

An excited user wrote, "Surya bhai, how flexible you are?"

Surya Bhai how flexible you are?

This person had a suggestion for Suryakumar. "Surya bhai, please time the ball. Don't go too hard...Please take the game closely."

"Hope he gains his form in the next match," read a comment.

Hope he gains his form in next match.

After a great run in the last two IPL seasons with 400 plus runs in each, Surya's performance this year has been disappointing. He has scored 235 runs in 13 matches at an average of 18.07.

With Delhi Capitals, Chennai Super Kings, Royal Challengers Bangalore already in the playoffs, there is a tight tussle between Mumbai Indians and Kolkata Knight Riders for the 4th spot. For Mumbai to qualify, the best-case scenario is Kolkata Knight Riders losing their last game of the group stage, and MI winning theirs.

KKR are scheduled to play Rajasthan Royals tonight, October 7, and MI will face SRH on October 8. Both fixtures will start at 7:30 pm on the respective days.

Mumbai Indians Suryakumar Yadav IPL 2021 Cricket
Get the latest updates on ICC Women's Cricket World Cup 2022 and IPL 2022, check out the Schedule , Live Score and IPL Points Table. Like us on Facebook or follow us on Twitter for more sports updates. You can also download the NDTV Cricket app for Android or iOS.