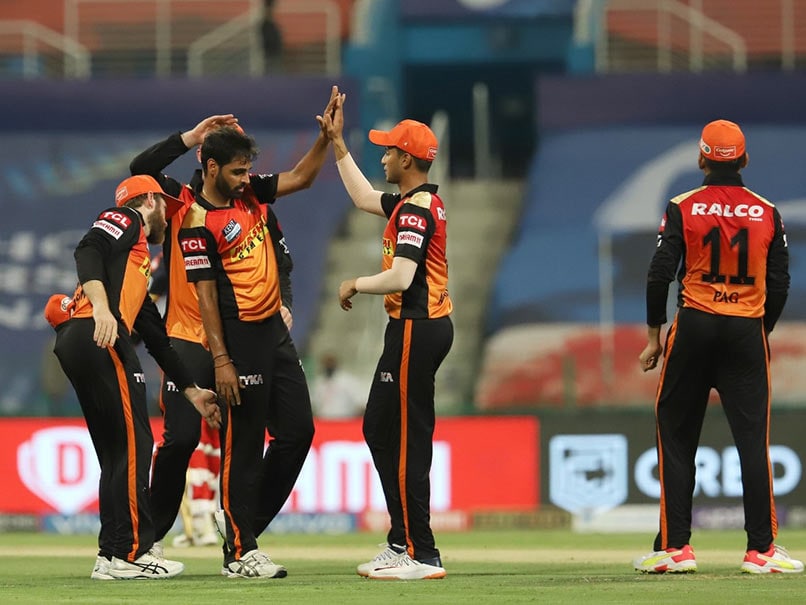 RCB vs SRH: Bhuvneshwar Kumar defended 13 runs in the final over vs Royal Challengers Bangalore.© BCCI/IPL

SunRisers Hyderabad (SRH) won a thriller against Royal Challengers Bangalore (RCB) by 4 runs in an Indian Premier League (IPL) 2021 tie at the Sheikh Zayed Stadium in Abu Dhabi on Wednesday. Chasing the target of 142 runs, RCB lost three early wickets but then Glenn Maxwell (40) and Devdutt Padikkal (41) added 54 runs for the fourth wicket. Padikkal struggled in the middle and played with a strike of less than 80. All the bowlers from SRH got one wicket. Umran Malik was the best bowler for SRH when it comes to bowling figures. The 21-year-old pacer from Jammu and Kashmir also bowled the fastest delivery by an Indian in IPL history. He bowled a 152.95 kmph thunderbolt to Devdutt Padikkal in his second over. With this loss, the chances of Virat Kohli-led side finishing in top-two took a massive hit as the Delhi Capitals (DC) and Chennai Super Kings (CSK) are ahead of them in net run rate. (SCORECARD)

Bhuvneshwar Kumar Royal Challengers Bangalore vs Sunrisers Hyderabad, Match 52 IPL 2021 Live Score Live Cricket Score Live Blogs Cricket
Get the latest updates on Fifa Worldcup 2022 and check out  Fifa World Cup Schedule, Stats and Live Cricket Score. Like us on Facebook or follow us on Twitter for more sports updates. You can also download the NDTV Cricket app for Android or iOS.