KKR on Saturday shared pictures of old friends Suryakumar Yadav and Kuldeep Yadav as the duo reunited at Team India's bio-bubble in Mumbai ahead of Sri Lanka tour. 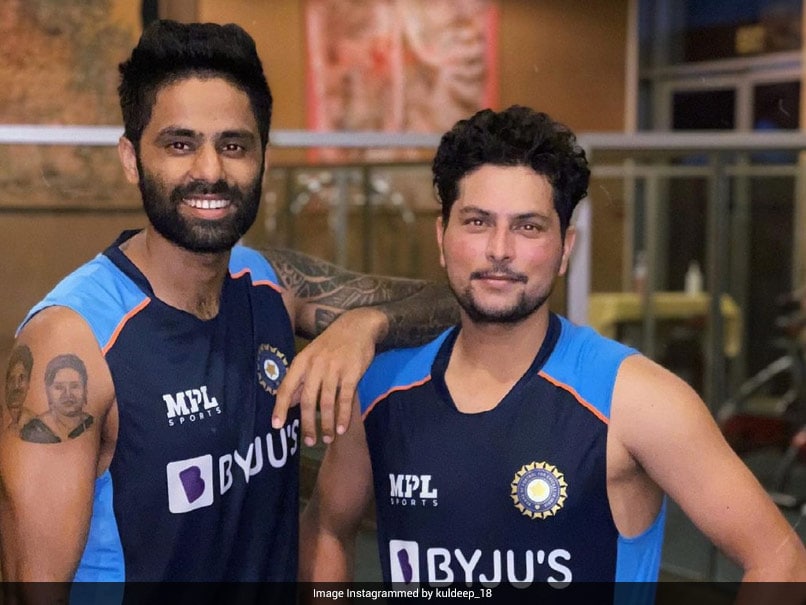 Kuldeep Yadav and Suryakumar Yadav pose for a photo together.© Instagram

The two times Indian Premier League (IPL) champions Kolkata Knight Riders (KKR) on Saturday shared two photographs of Kuldeep Yadav and Suryakumar Yadav and it has sent cricket enthusiasts into a frenzy. While the first snap is from Team India's Mumbai camp, where the Sri Lanka-bound players are serving a two-week quarantine, the second one is an old picture of the duo from KKR's archive when Suryakumar used to play for the Kolkata-based outfit. "Reunited: Purani Dosti (Old friendship)," KKR wrote in the caption box of the post.

The post soon became the talk of the town as fans started sharing their excitement in the comment section.

While a few cricket enthusiasts were happy to see the two together, other fans rued that KKR let go of Suryakumar after IPL 2015.

"That's the biggest loss to KKR," wrote a user.

That's the biggest loss to kkr

"That was the biggest profit for SKY. SKY would've played his whole life at #6/#7 in KKR, In MI (Mumbai Indians), he got opening/#3 slot and he could show his potential to the world," wrote another fan on the post.

That was biggest profit for SKY

In Mi, he got opening/#3 slot & he could show his potential to the world.

"Kuldeep Yadav must be in the playing 11 for KKR. You can't underestimate a player like him," read another comment.

Kuldeep Yadav must be in playing 11 for #KKR
You can't underestimate the player like him.

A follower said that Suryakumar is going to be the next captain of the Kolkata Knight Riders after the mega auction.

"Next Captain of KKR after the mega auction," a user wrote along with a smiling face with heart-shaped eyes emoji.

Kuldeep Yadav must be in playing 11 for #KKR
You can't underestimate the player like him.

Meanwhile, in another post, KKR gave an update about their star all-rounder Andre Russell, who will be next seen in action for the West Indies on Saturday during their first T20I against South Africa.

"Those asking How is Dre? The Big Man will be seen in Maroon soon. He is named in the West Indies T20I squad for their series vs SA," the post said.

The Big Man will be seen in Maroon soon. He is named in the @windiescricket T20I squad for their series vs SA pic.twitter.com/XMSEzaczAy

The Eoin Morgan-led KKR were placed at the penultimate position in the IPL 2021 standings when the marquee event was postponed on May 4 due to the COVID-19 scare.

The cash-rich league is set resume in Sepetmber-October and will take place in the United Arab Emirates.

Kuldeep Yadav IPL 2021 Cricket
Get the latest updates on ICC Women's Cricket World Cup 2022 and IPL 2022, check out the Schedule , Live Score and IPL Points Table. Like us on Facebook or follow us on Twitter for more sports updates. You can also download the NDTV Cricket app for Android or iOS.