The video of Jimmy Neesham netting a basketball from 30 yards away was shared by Mumbai Indians on Instagram. 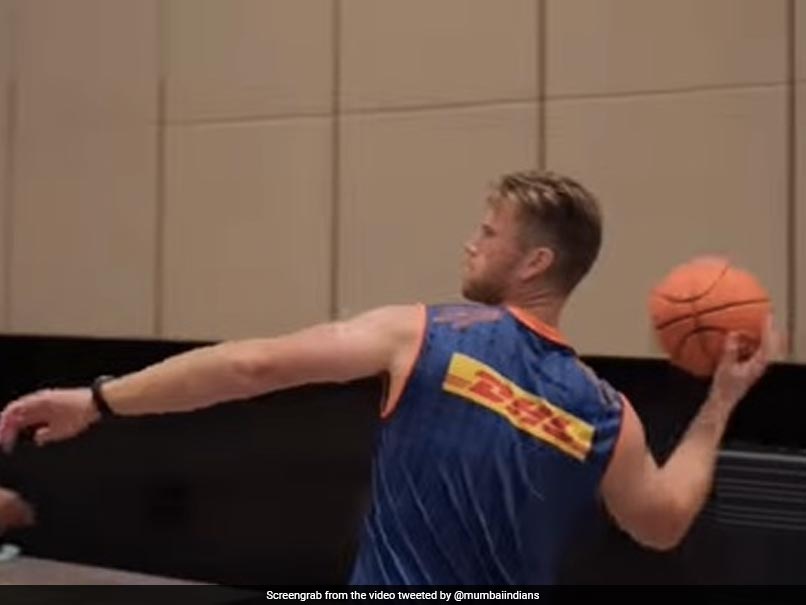 After last night's win against Rajasthan Royals in an Indian Premier League (IPL) 2021 clash, Mumbai Indians have a lot to celebrate. Rohit Sharma's team defeated the Sanju Samson-led side by chasing down the low total of 90 runs in just 8.2 overs. MI recently posted a video from their session off the field on Instagram. In the video, MI's New Zealand all-rounder Jimmy Neesham can be seen throwing a basketball into the net from a distance of 30 yards. The Kiwi International's basketball skills have surprised his teammates and netizens alike. MI wicketkeeper Ishan Kishan can also be seen, in the video, shouting in excitement and then hugging Neesham.  "These are the kind of things you tell your friends and they be like: Kya fekta hain bey... But we got proof on camera," the caption read.

Fans too cheered the unbelievable throw with one of them even comparing Neesham to Olympic gold medalist Neeraj Chopra. "Real I'd se aao Neeraj Chopra (Log in from your read account, Neeraj Chopra"," the user wrote.

Digital creator Viraj Ghelani commented with the pun, "Jimmy throwsham". While some others suggested him an alternate career in basketball.

A user said the throw reminded him of Chris Hemsworth's character  Thor in the Avengers series.

People also commented on Kishan's reaction with one fan comparing Ishan's excitement to that of an enthusiastic child.

Apart from the Thor-like throw, Neesham also had a memorable game last night. Playing his first match for the franchise in the UAE leg of the Indian Premier League, the New Zealand all-rounder took three wickets for just 12 runs in his quota of four overs.

This helped MI restrict the Royals to 90 runs, which was chased down easily by the Rohit Sharma-led side with 70 balls to spare and eight wickets in hand.

The defending champions have struggled in IPL 2021, and are in a close fight with Kolkata Knight Riders for the last spot in the playoffs with both teams having secured 12 points from 13 matches. Chennai Super Kings, Delhi Capitals, and Royal Challengers Bangalore have already qualified for the playoffs.

Mumbai Indians will face Sunrisers Hyderabad in their last group stage encounter on Friday, October 8. The match will commence at 7:30 pm.

James Neesham Cricket
Get the latest updates on ICC Women's Cricket World Cup 2022 and IPL 2022, check out the Schedule , Live Score and IPL Points Table. Like us on Facebook or follow us on Twitter for more sports updates. You can also download the NDTV Cricket app for Android or iOS.