RCB captain Virat Kohli, pacer Mohammed Siraj and a few other foreign players completed their quarantine and had their first hit in the nets ahead of IPL 2021 resumption. 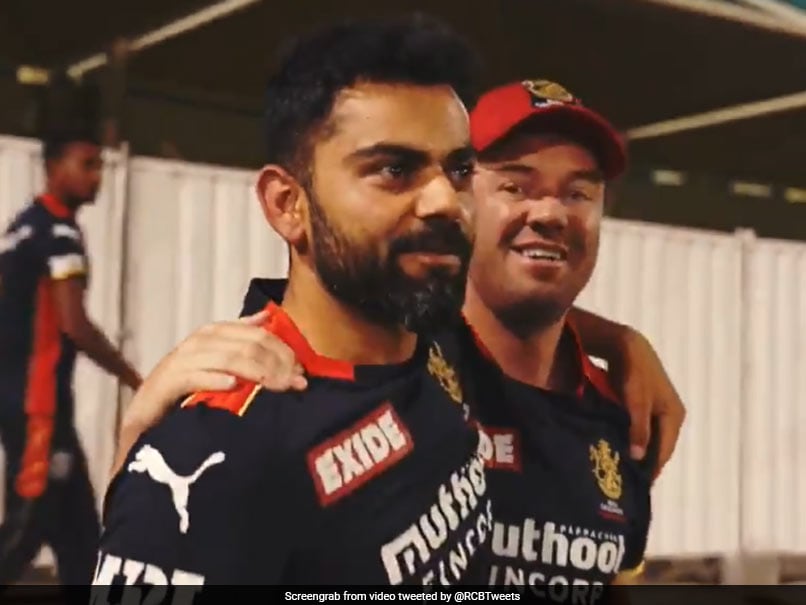 Virat Kohli with AB de Villiers during a RCB training session in the UAE.© Twitter

There were "smiles, hugs and laughter" in Royal Challengers Bangalore (RCB) camp as their skipper Virat Kohli and a few other players finished their quarantine and attended their first training session in the United Arab Emirates (UAE) ahead of Indian Premier League (IPL) 2021 resumption. RCB posted a video on their social media handles in which Kohli can be seen greeting his teammates before sweating it out on the field. "Bold Diaries: Virat Kohli joins the RCB team after quarantine. There were smiles, hugs and laughter in the RCB camp as captain Virat Kohli, Mohammed Siraj and some of our foreign players had their first hit in the nets," the video was captioned.

There were smiles, hugs and laughter in the RCB camp as captain Virat Kohli, Mohammed Siraj and some of our foreign players had their first hit in the nets.#PlayBold #WeAreChallengers #IPL2021 pic.twitter.com/gxSEVf15rR

Virat Kohli and Siraj were in Manchester for the fifth Test match against England which was cancelled following Covid outbreak in the Indian team contingent.

Both Indian players arrived in Dubai on Saturday in a chartered flight from England.

On Tuesday, the franchise announced that RCB players will wear blue jerseys to show solidarity and support to the frontline workers.

RCB will resume their IPL 2021 campaign against Eoin Morgan-led Kolkata Knight Riders at the Sheikh Zayed Cricket Stadium in Abu Dhabi on September 20.

The Virat Kohli-led side were third on the points table when the franchise-based league was halted midway after several franchises reported positive Covid cases inside the bio-secure bubble.

The tournament was then moved out of India and the Indian board along with IPL Governing Council decided that the remainder of the T20 league will be played in the UAE.

Royal Challengers Bangalore Cricket IPL 2021
Get the latest updates on Fifa Worldcup 2022 and check out  Fifa World Cup Schedule, Stats and Live Cricket Score. Like us on Facebook or follow us on Twitter for more sports updates. You can also download the NDTV Cricket app for Android or iOS.