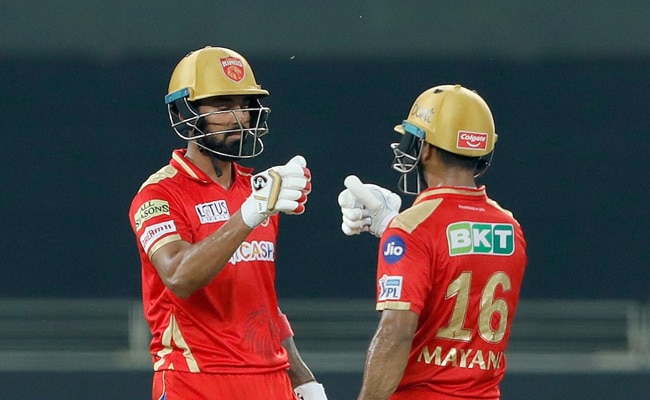 KL Rahul got past 3000 runs in the Indian Premier League (IPL), after smashing two huge sixes during Punjab Kings' (PBKS) ongoing IPL 2021 match against Rajasthan Royals (RR) in Dubai on Tuesday. Rahul reached the impressive milestone in his 80th IPL innings, which makes him the second-fastest to have achieved such a feat after teammate Chris Gayle. The West Indies cricketer took 75 innings to cross 3000 runs. Despite luck supporting the wicketkeeper-batsman, cricket fans on Twitter hailed the India international for his magnificent performance. One user lauded the PBKS skipper and wrote, "KL Rahul completes 3000 IPL runs The Real Mr. IPL".

PBKS skipper Rahul initially won the toss and elected to bowl. Rajasthan set a target of 186 runs after posting 185 in 20 overs. Yashasvi Jaiswal slammed 49 off 36 balls and Mahipal Lomror also scored 43 off 17 balls.

Punjab currently need 19 from 20 balls to win the match. Rahul was dismissed after scoring 49 runs, narrowly missing out on a half-century. Meanwhile, Mayank Agarwal smashed 67 off 43 balls.

KL Rahul becomes the 2nd fastest to reach 3,000 IPL runs. What a run he's having with the Punjab Kings.#PBKSvRR pic.twitter.com/QvR5pmAVVI

But according to people, Player A is having brilliant season but Player B is a statpadder.

PBKS will be hoping to seal win and revive their IPL 2021 campaign in UAE.

KL Rahul Cricket Punjab Kings vs Rajasthan Royals, Match 32
Get the latest updates on IND vs NZ 2021, check out the Schedule and Live Score . Like us on Facebook or follow us on Twitter for more sports updates. You can also download the NDTV Cricket app for Android or iOS.