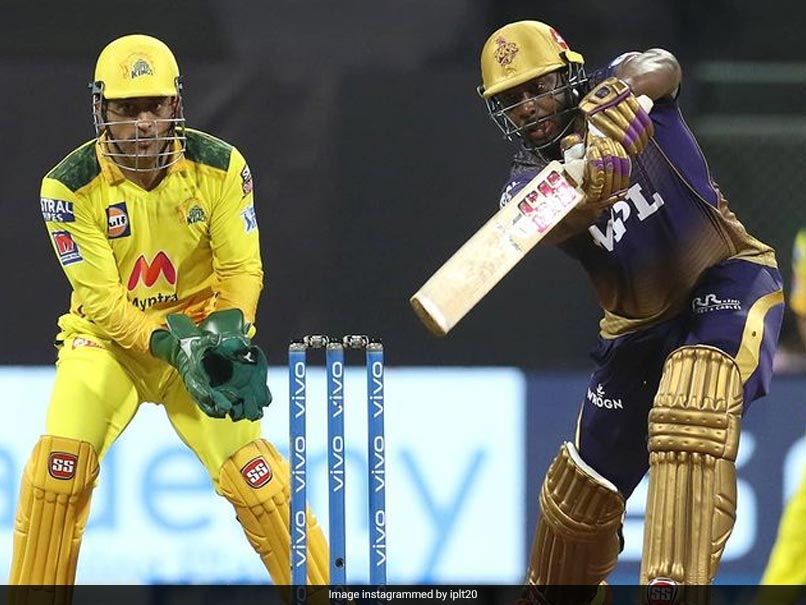 All eyes will be on Andre Russell as KKR gear up to face Chennai Super Kings in Abu Dhabi.© Instagram

Chennai Super Kings and Kolkata Knight Riders clash in the first match of the IPL 2021 double header on Sunday. Both CSK and KKR are in top form, having won their previous two matches in the UAE leg so far. CSK are second in the IPL points table while Kolkata Knight Riders are currently fourth. While CSK outclassed Virat Kohli's Royal Challengers Bangalore in their previous game, KKR registered a convincing win over defending champions Mumbai Indians.

A CSK win will all but assure them a place in the playoffs. KKR too are in a good position and a victory for them will give them some breathing space over some of the other teams in the top four race.

With CSK and DC the frontrunners for two playoff spots, others like Royal Challengers Bangalore, Mumbai Indians, KKR, Rajasthan Royals and Punjab Kings will have to battle it out for the two remaining spots.

KKR's big wins in their two games in the UAE has bumped up their net run-rate, giving them an advantage over the others.

The Kolkata outfit will be full of confidence going into the clash against CSK. Rahul Tripathi and Venkatesh Iyer have been the standouts so far for KKR, while Varun Chakaravarthy and Sunil Narine have been the stars with the ball.

But their opponents on Sunday, CSK, have been in top form as well, beating MI and RCB without breaking a sweat.

For CSK, Ruturaj Gaikwad has been the star man with the bat in hand with others chipping in with crucial runs as well. Dwayne Bravo starred for MS Dhoni's team against RCB and the West Indian all-rounder will be confident of causing the KKR batters some problems as well.

With not many matches left to go, both teams will be looking to get the job done, but KKR surely need the win more than CSK.

Eoin Morgan IPL 2021 Chennai Super Kings vs Kolkata Knight Riders, Match 38 Cricket
Get the latest updates on IPL 2021, check out the IPL 2021 Schedule and Indian Premier League Live Score . Like us on Facebook or follow us on Twitter for more sports updates. You can also download the NDTV Cricket app for Android or iOS.