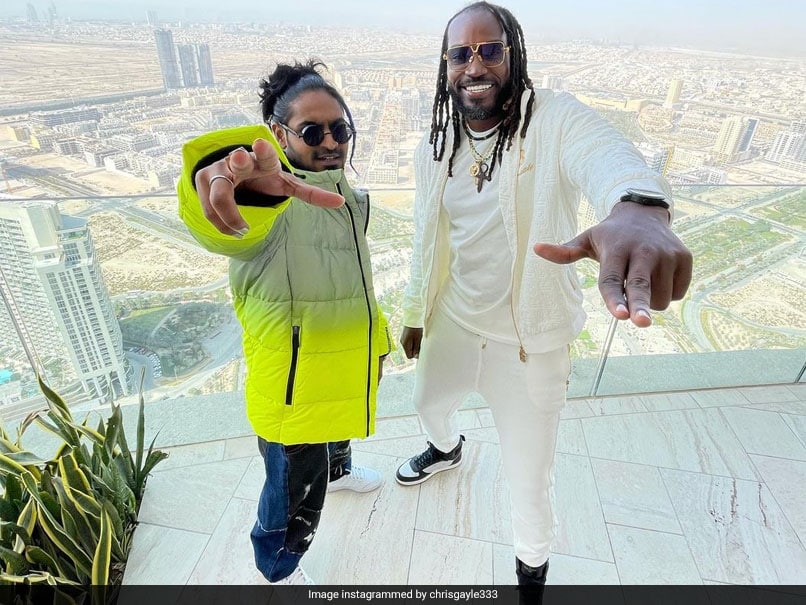 Punjab Kings player Chris Gayle released a music video today in collaboration with popular rapper Emiway Bantai. The rap video is named 'India se Jamaica' and involves Gayle showcasing his rap singing abilities with Bantai. Gayle took to Instagram to share a clip from the video along with a caption that read, "Jamaica To India OUT NOW @emiway_bantai." Bantai is a famous Indian rapper with more than 14 million YouTube subscribers while on the other hand, Gayle follows the likes of fellow West Indian Dwayne Bravo in releasing a music video.

The first look of the video was posted by Bantai on his Instagram profile on April 1 this year, that sent their fans into a frenzy.

Gayle had applauded his collaboration with Bantai with an Instagram post where he thanked the rapper for working with him.

The caption read, "From Jamaica to india you know it's @chrisgayle333 & @emiway_bantai. Bro, it was a pleasure meeting and working with you... you're such a humble soul super talented and a true professional! I had a blast shooting our song together, can't wait for it to drop!! Big Respect #StayTunedPeeps."

Gayle is part of the Punjab Kings franchise for IPL 2021 captained by KL Rahul. Punjab Kings looked promising at the start of the 2020 edition but disappointed their fans eventually with a sixth-place finish.

Punjab Kings play their first two matches at the Wankhede Stadium in Mumbai with their opening game scheduled for April 12 against a formidable Rajasthan Royals led by Sanju Samson.

Punjab Kings IPL 2021 Cricket
Get the latest updates on ICC T20 Worldcup 2022, check out the Schedule and Live Score. Like us on Facebook or follow us on Twitter for more sports updates. You can also download the NDTV Cricket app for Android or iOS.