IPL 2021: Chris Gayle Is Back, This Time Doing It The Daler Mehndi Style 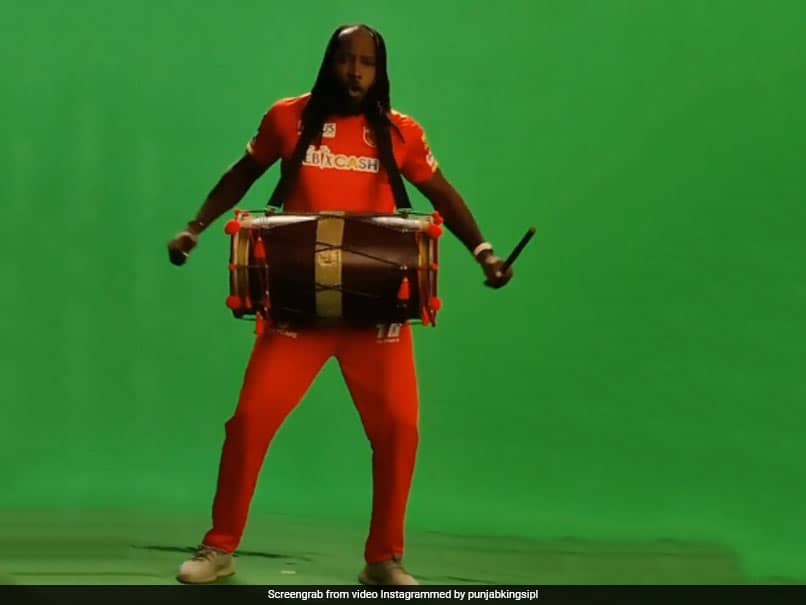 Chris Gayle was seen enjoying his time off the field during a shoot.© Instagram

Chris Gayle is a superstar in the true sense. Whether on the field or off it, the Jamaican dasher has the spotlight always on him. Days after showing off his Michael Jackson like dancing skills, the Punjab Kings icon went "Tunak Tunak Tun" to announce his arrival. In the latest post by the franchise, the explosive batsman is seen beating a dhol to the tunes of Daler Mehndi's chartbuster. "Opening day of the IPL 2021 and Boss is ready to perform," read the post.

Within an hour of being uploaded, the clip has received more than 18k likes on the social media platform. Fans couldn't control their excitement after seeing "The Universe Boss" all pepped up for the cricket carnival. They made a bee-line to the comment box and praised the flamboyant cricketer. One of the fans called him "Daler Mehendi of West Indies." Another said, "Gayle banyega bowlers ki rail (Gayle will take on the bowlers)."

In another video, the Punjab-based franchise spread the word, "Gayle storm is here." The caption further read, "Chris Gayle issa vibe, isn't he?" From practice session to funny faces to on-field drama, the clip has it all. It takes us through Gayle's journey in the franchise.

The clip has crossed 10k views in no time. Fans, who are all charged up to see their favourite player in action, wrote, "Gayle Jatt", "Universe Boss" and "King is here."

On Wednesday, Gayle celebrated in style after finishing his quarantine period by performing a "moonwalk" on one of pop legend Michael Jackson's songs.

Punjab Kings will begin their IPL campaign on Monday against Rajasthan Royals. The match will be played at Wankhede Stadium in Mumbai.

Chris Gayle Cricket IPL 2021
Get the latest updates on IPL 2021, IPL Points Table , IPL Schedule 2021 , live score . Like us on Facebook or follow us on Twitter for more sports updates. You can also download the NDTV Cricket app for Android or iOS.