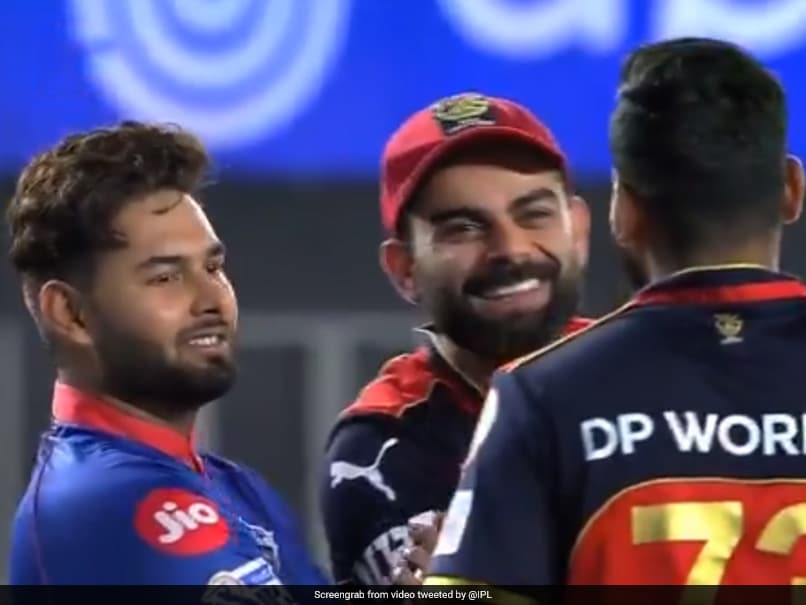 Virat Kohli and Rishabh Pant shared a laugh after a thrilling contest in Ahmedabad.© Twitter

Royal Challengers Bangalore(RCB) beat Delhi Capitals (DC) by one run in a last-ball thriller at the Narendra Modi Stadium in Ahmedabad on Tuesday. Chasing 172 for the win, DC needed six off the final ball of the match but Rishabh Pant could only manage to squeeze the ball for a boundary as RCB registered a thrilling victory. After the win, Indian Premier League (IPL) posted a video on its official Twitter handle where RCB skipper Virat Kohli can be seen sharing a laugh with DC captain Rishabh Pant. "A range of emotions after that last-ball thriller," the video was captioned.

In the match, Pant won the toss and opted to bowl. Ishant Sharma and Avesh Khan provided early breakthroughs as Virat Kohli and Devdutt Padikkal were sent back inside the powerplay.

AB de Villiers came to RCB's rescue and took them to a competitive total of 171 for five with a blistering half-century. The former South Africa captain smashed five sixes in an unbeaten knock of 75 off just 42 deliveries.

In reply, Delhi lost Shikhar Dhawan and Steve Smith cheaply. Prithvi Shaw looked good during his 21-run knock, before edging a wide delivery from Harshal Patel straight to the wicketkeeper.

Rishabh Pant and Shimron Hetmyer hit half-centuries and kept Delhi in the hunt but a brilliant last over by Mohammed Siraj helped RCB get over the line.

With the win, the Virat Kohli-led side are now sitting at the top of the IPL 2021 points tablewith five wins from six matches.

Rishabh Pant Avesh Khan Mohammed Siraj IPL 2021 Cricket
Get the latest updates on ICC T20 Worldcup 2022, check out the Schedule and Live Score. Like us on Facebook or follow us on Twitter for more sports updates. You can also download the NDTV Cricket app for Android or iOS.