Watch: David Warner Dances With Rashid Khan And Manish Pandey While Shooting For A Commercial

The three SunRisers Hyderabad players were seen grooving to a song while getting ready for the shot. 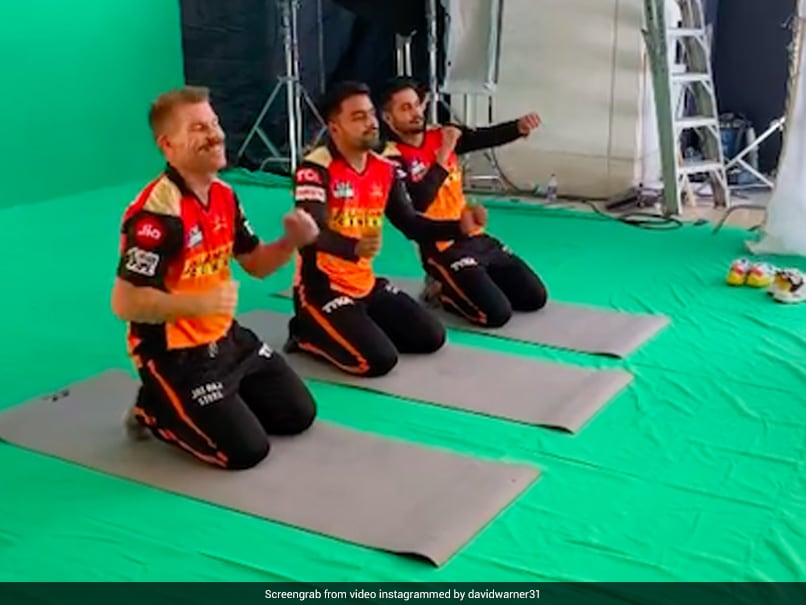 This is not the first time that Australia and SunRisers Hyderabad batsman David Warner has shared videos on Instagram in which he is seen dancing. The only difference is that this time Warner -- who otherwise shares clips featuring his family members who also love dancing to Bollywood songs -- had teammates from his Indian Premier League (IPL) franchise SunRisers Hyderabad (SRH) for company. In the video, Warner, Rashid Khan, and Manish Pandey can be seen kneeling on yoga mats, with their hands behind their back as the trio prepare to shoot for a commercial, which was shot indoors in front of a green screen. The three players were seen grooving to a song while they were readying themselves for the shot. Warner captioned the post, "Our attempt of a commercial. @rashid.khan19 @manishpandeyinsta Caption this?"

Rashid was among those who commented on Warner's post. He also posted emojis of face with tears of joy.

A user wrote, "You were great."

Another fan commented, "Hey Warner, lots of love from India."

Another user, who had SRH's flag as his profile picture, requested Warner not to leave the franchise. "Please don't leave SRH, your knocks against KKR were awesome."

Within three hours of being posted, the video had garnered over 6 lakh views.

Just last week, the left-handed Australian batsman had posted a picture where he is seen sitting near the boundary line. With closed eyes, Warner had his hands on his lips as though he was thinking about something. "Caption this!!" he wrote.

SRH, who finished third last year, had struggled so far this season, winning only one of their seven matches before the IPL was suspended due to the rising COVID-19 cases. The marquee cricket tournament will resume on September 19 and all eyes will once again be on Warner to help his team qualify for the knockout stages.

The Board of Control for Cricket in India (BCCI) has zeroed in on the date for the resumption of the 14th edition of the IPL, which will now be held in the UAE. The first game will be played on September 19 while the final will be held on October 15.

Manish Pandey IPL 2021 Cricket
Get the latest updates on ICC Women's Cricket World Cup 2022 and IPL 2022, check out the Schedule , Live Score and IPL Points Table. Like us on Facebook or follow us on Twitter for more sports updates. You can also download the NDTV Cricket app for Android or iOS.