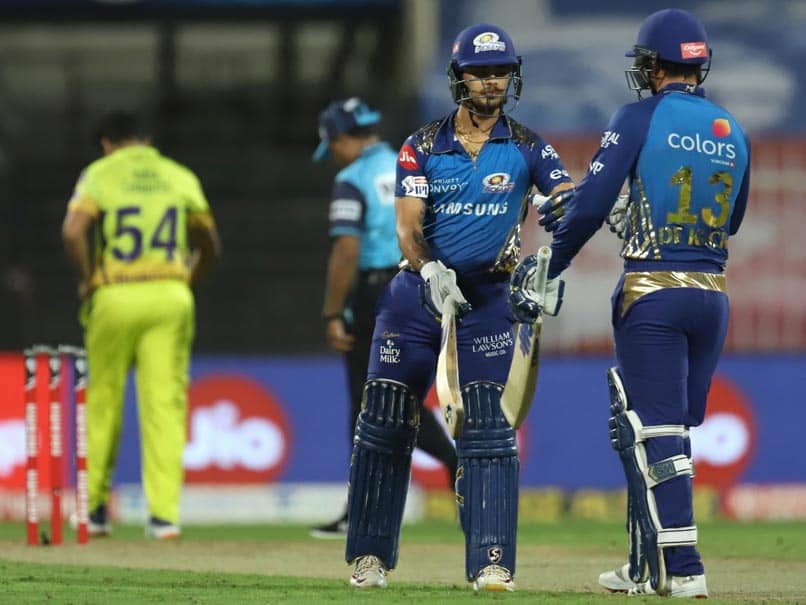 Defending champions Mumbai Indians (MI) defeated Chennai Super Kings (CSK) by 10 wickets in Match 41 of the IPL 2020 at Sharjah Cricket Stadium. Quinton de Kock and Ishan Kishan stitched an unbeaten partnership of 116 runs to help MI get across the line, after the side was handed a paltry target of 115 runs. Kishan smashed 68* off 37 deliveries, with De Kock accumulating 46 runs off the same number of balls. Earlier, CSK finished with a total of 114 runs for the loss of nine wickets. English all-rounder Sam Curran was the highest run-scorer, with 52 runs off 47 deliveries. Sam helped the Chennai-based franchise rebuild after being restricted to 43/7 at one stage. Trent Boult was the pick of the bowlers, accounting for four wickets while conceding 18 runs. Jasprit Bumrah and Rahul Chahar further chipped in with two wickets apiece. (SCORECARD)

Ambati Rayudu Shardul Thakur Live Score Live Cricket Score Live Blogs Cricket
Get the latest updates on India vs Australia Series, check out the India vs Australia Schedule for 2020-21 and Ind vs Aus live score . Like us on Facebook or follow us on Twitter for more sports updates. You can also download the NDTV Cricket app for Android or iOS.