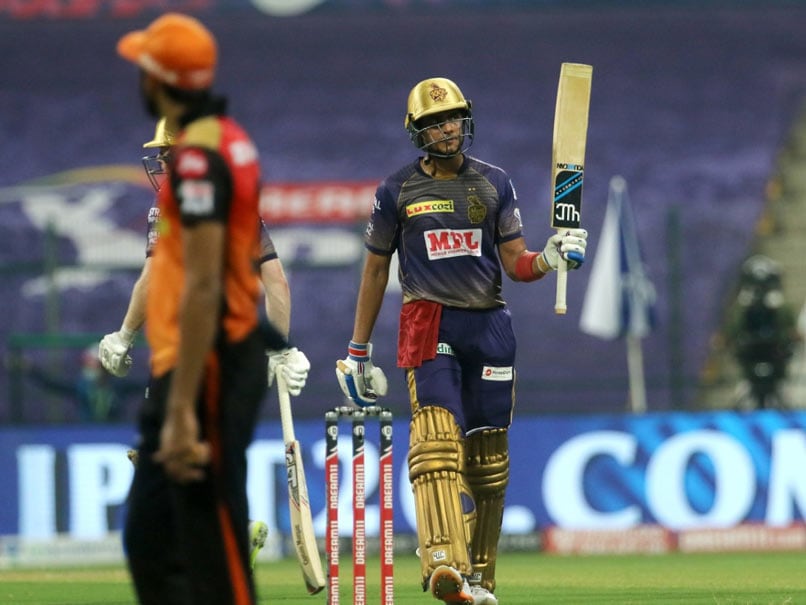 Shubman Gill scored a fluent half-century to guide Kolkata Knight Riders(KKR) to a comfortable victory over SunRisers Hyderabad at the Sheikh Zayed Stadium in Abu Dhabi on Saturday. Chasing a target of 143, KKR got off to a poor start losing the wickets of Sunil Narine (0) and Nitish Rana (26) inside the powerplay. KKR skipper Dinesh Karthik too lost his wicket for nought but Eoin Morgan stitched an important 92-run partnership with Gill to guide his side home and register their first win in Indian Premier League (IPL) 2020.

Gill remained unbeaten on 70 runs and his innings was filled with five boundaries and two maximums.

Morgan too found his touch as he remained not out on 42 and hit three boundaries and two sixes during his stay at the crease.

Earlier, SRH captain David Warner won the toss and opted to bat. The decision backfired as Pat Cummins cleaned up Jonny Bairstow in the fourth over.

Varun Chakravarthy, playing his second IPL game, got the big wicket of Warner as the Australian chipped one straight back to the bowler.

Manish Pandey fought a lone battle for SRH, scoring his 15th IPL half-century. Wriddhiman Saha tried to accelerate but failed to find the middle of his bat and struggled his way to a sluggish knock of 30 off 31 deliveries.

For SRH, Rashid Khan was the pick of the bowlers who picked up a wicket and gave away just 24 runs from his quota of four overs.

KKR's next league fixture is against Rajasthan Royals at the Dubai International Stadium on September 30 while SRH will take on table-toppers Delhi Capitals on September 29.

Pat Cummins IPL 2020 Cricket Kolkata Knight Riders vs Sunrisers Hyderabad, Match 8
Get the latest updates on ICC T20 Worldcup 2022 and CWG 2022 check out the Schedule, Live Score and Medals Tally. Like us on Facebook or follow us on Twitter for more sports updates. You can also download the NDTV Cricket app for Android or iOS.