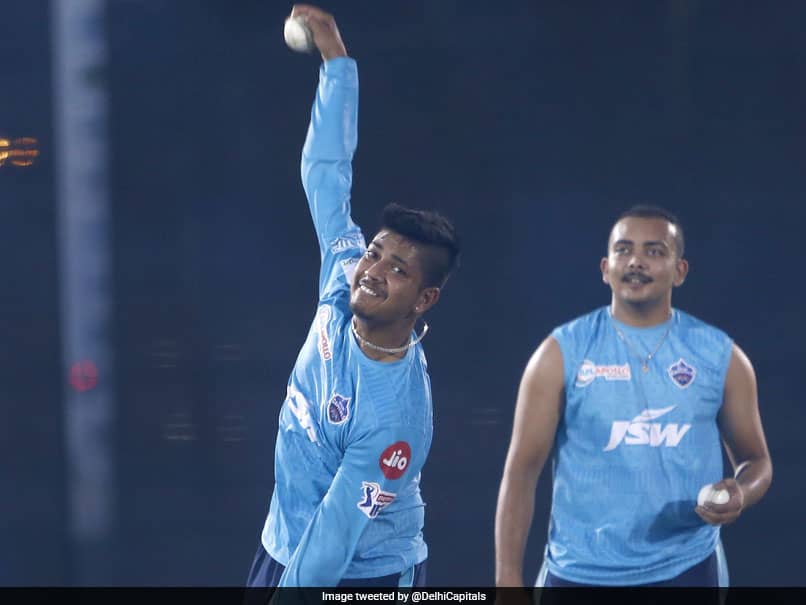 IPL 2020: Sandeep Lamichhane was seen steaming in to bowl a quick one in the Delhi Capitals nets.© Twitter

Sandeep Lamichhane, the young Nepalese sensation, has made waves in T20 leagues across the world for his loopy leg-breaks. He is part of a very potent spin attack in the Delhi Capitals' armoury this season, along with the likes of Ravichandran Ashwin, Amit Mishra and Axar Patel. However, what is an unlikely sight is the 20-year-old displaying some quality pace bowling. Sharing a video of Lamichhane trying out a seamer in the nets, Delhi Capitals wrote: "There's a lot happening in the DC Parallel Universe."

Lamichhane responded with a cheeky tweet of his own.

This is not the first video where a Delhi Capitals player has been seen doing something out of the box. They had earlier tweeted a video of Prithvi Shaw trying out some leg-spin.

Maybe taking a cue from the young Indian opener, DC's South African pace duo Kagiso Rabada and Anrich Nortje were seen trying their hand at leg-breaks as well in another video shared by the Delhi-based franchise.

Delhi Capitals got their IPL 2020 campaign off to a winning start, beating Kings XI Punjab in the Super Over after a dramatic match ended in a tie.

Marcus Stoinis starred for DC, scoring a quick-fire half-century and then bowling three dot balls at the end of KXIP's innings - taking two wickets in the process - to stop them from clinching the match.

Rabada was the star in the Super Over, as he dismissed KL Rahul and Nicholas Pooran off consecutive deliveries to restrict them to just two runs and setting up an easy victory in the end for the Capitals.

Delhi Capitals will take on Chennai Super Kings in their next match on Friday at the Dubai International Stadium.

Delhi Capitals Sandeep Lamichhane IPL 2020 Cricket
Get the latest updates on IPL 2020, check out the IPL Schedule for 2020 and Indian Premier League (IPL) Cricket live score . Like us on Facebook or follow us on Twitter for more sports updates. You can also download the NDTV Cricket app for Android or iOS.