IPL 2020, Qualifier 1, MI vs DC: Jasprit Bumrah's 4 for 14 and Ishan Kishan's unbeaten 55 off 30 helped Mumbai Indians beat Delhi Capitals by 57 runs and make the final for the second consecutive year. 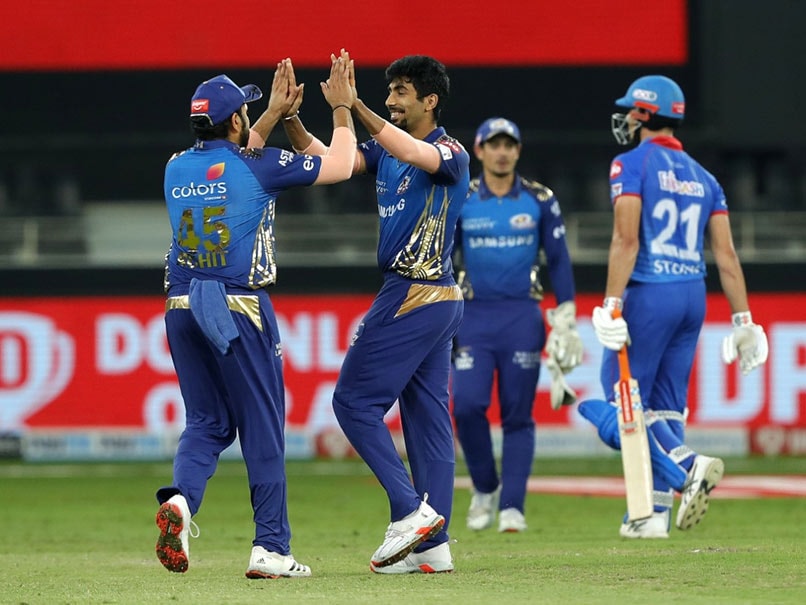 It started with a four and ended with a six – Mumbai Indians' innings in Qualifier 1 of Indian Premier League 2020 against Delhi Capitals was bookended with boundaries, and that was the story of their day as half-centuries from Suryakumar Yadav (51 off 38) and Ishan Kishan (55 not out off 30), and a rampaging 14-ball 37 not out by Hardik Pandya powered them to 200 for 5. Delhi stuttered in their reply, going from a horrendous 0 for 3 to 20 for 4 and finally 143 for 8, losing by 57 runs. With this win, Mumbai booked their place in the IPL 2020 final on November 10.

Mumbai's innings began with a boundary – a drive straight down the ground by Quinton de Kock – and ended with a six over wide long-off by Kishan, and in between the two balls there were plenty more as Kagiso Rabada (0/42 from 4 overs), Anrich Nortje (1/50) and Daniel Sams (0/44) faltered in a crucial clash.

R Ashwin, though, got key wickets of Rohit Sharma and Kieron Pollard, both gone for ducks, and de Kock (41 off 25). He was one of the positives for Delhi with his figures of 3/29 from four overs on what was otherwise a disappointing outing.

De Kock laid into the Delhi bowlers after losing his opening partner Rohit in the second over.

He hit three boundaries in the first over of the match - two of them straight down the ground - bowled by Sams to set the tone for the innings.

There was no respect shown even to the highest wicket-taker of the tournament until this match, Rabada, who was pulled for a boundary even as he delivered a searing bouncer, as Mumbai finished the Powerplay at 63 for 1.

Ashwin struck right after the Powerplay, making de Kock hole out to Delhi captain Shreyas Iyer as Delhi managed to pull things back at the halfway stage, keeping Mumbai to 93 for 2.

Suryakumar got going at the other end and brought up his fifty off just 36 balls. However, he was dismissed caught at deep square leg off Nortje soon after even as Delhi brought up their 100 in the 12th over.

Pollard's duck - caught at wide long-on off Ashwin - gave Delhi hopes of keeping Mumbai in check but Hardik exploded in the death overs, hitting Rabada for consecutive sixes in the 19th and then Nortje for two more in the final over.

Mumbai accumulated 55 runs off the last three overs to touch 200 on the last ball of the innings.

Delhi got off to a disastrous start as their top three got ducks and were back in the hut inside the first three overs of the chase.

Trent Boult got Prithvi Shaw (0) caught behind in the first over before trapping Ajinkya Rahane (0) lbw with a searing in-swinger in the same over.

Bumrah bowled Shikhar Dhawan (0)  with a yorker to leave Delhi tottering at 0 for 3 before he came back in the fourth over to get Iyer (12) caught at cover.

When Rishabh Pant (3) holed out to Suryakumar at wide long-on off Krunal Pandya, it looked like the game will done soon.

However, Marcus Stoinis (65 off 46) had Axar Patel (42 off 33) tried to bring Delhi some sort of parity in the contest. They added 71 runs for the sixth wicket to take Delhi to 112 for 5 in 15 overs, needing an improbable though not impossible 89 runs off the last five overs.

Bumrah bowled Stoinis on the first ball of the 16th to nip any chances of a Delhi comeback in the bud.

Bumrah finished 4 for 14 in four overs while Boult got 2 for 9 in two.

Delhi will now play the winner of Friday's Eliminator between SunRisers Hyderabad and Royal Challengers Bangalore in Qualifier 2 in Abu Dhabi on Sunday.

Axar Patel Anrich Nortje IPL 2020 Mumbai Indians vs Delhi Capitals, Qualifier 1 Cricket
Get the latest updates on Fifa Worldcup 2022 and check out  Fifa World Cup Schedule, Stats and Live Cricket Score. Like us on Facebook or follow us on Twitter for more sports updates. You can also download the NDTV Cricket app for Android or iOS.