IPL 2020: Delhi Capitals came up with a hilarious self-deprecating joke after finding themselves 20/4 chasing 201 in Qualifier 1 vs Mumbai Indians. 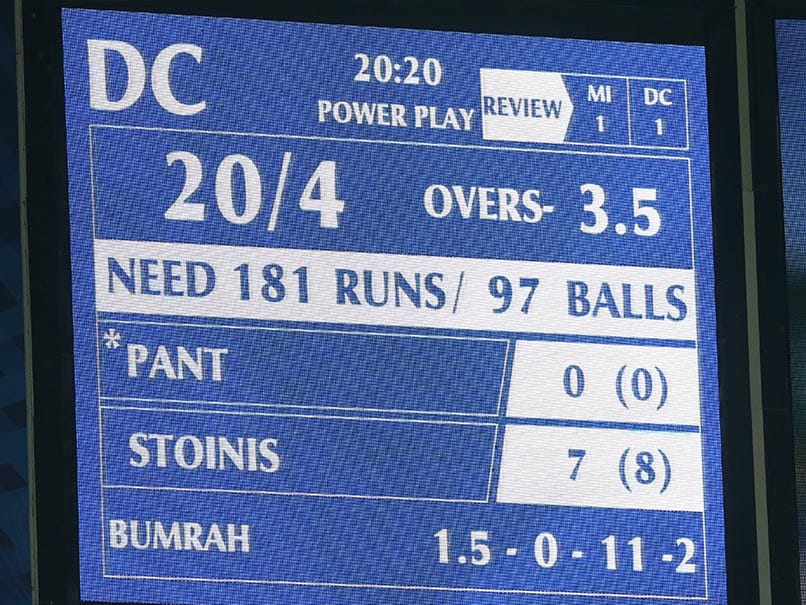 Delhi Capitals turned a tweet by US President Donald Trump into hilarious banter as they quote-tweeted Trump's "STOP THE COUNT!" with "Me to the guy updating the wickets column" as Delhi collapsed to 0 for 3 and then 20 for 4 in the first four overs in their chase of 201 runs in Qualifier 1 of Indian Premier League (IPL) 2020 against Mumbai Indians. Mumbai were powered by Hardik Pandya's 14-ball 37 not out and Ishan Kishan's unbeaten 55 off 30 to 200 for 5 in their 20 overs. Then, Trent Boult dismissed both Prithvi Shaw and Ajinkya Rahane in the very first over of the chase before Jasprit Bumrah cleaned up Shikhar Dhawan in the next and captain Shreyas Iyer in the fourth.

It wasn't Delhi's day in Dubai on Thursday as all of their bowlers bar R Ashwin (3/29) went for runs even as Suryakumar Yadav hit 51 off 38 and Quinton de Kock teed off in the Powerplay, smashing 40 off 25 balls.

Pandya took the likes of Kagiso Rabada, Anrich Nortje and Daniel Sams for sixes in an innings studded with five sixes but no fours.

Kishan hit four fours and three sixes in an innings that saw Rohit Sharma and Kieron Pollard, two of Mumbai's most experienced batsmen, going for ducks.

Rabada went wicket-less in his four overs and was hit for 42 runs, Nortje conceded 50 in his four and Sams was taken for 44 in his full quota.

Delhi's poor start was made worse when Iyer (12) hit one straight to Rohit at cover and Rishabh Pant (3) holed out to Suryakumar at long-on to reduce them to 41 for 5 in the eighth over.

Shikhar Dhawan IPL 2020 Mumbai Indians vs Delhi Capitals, Qualifier 1 Cricket
Get the latest updates on IPL Auction 2023 and check out  IPL 2023 and Live Cricket Score. Like us on Facebook or follow us on Twitter for more sports updates. You can also download the NDTV Cricket app for Android or iOS.