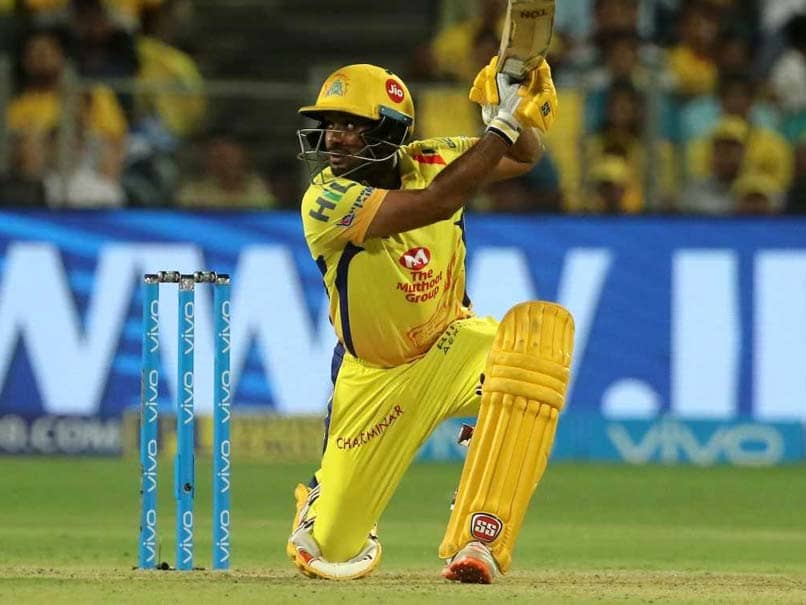 Ambati Rayudu is among players who can take Suresh Raina's place in the CSK batting line-up.© BCCI

Suresh Raina's decision to leave UAE and return home due to family reasons has left a huge void in the Chennai Super Kings middle-order and former New Zealand all-rounder Scott Styris believes that Ambati Rayudu could be the perfect answer to skipper MS Dhoni's worries. Speaking on Star Sports show Cricket Connected, Styris said: "Yeah, tough one, isn't it. A player of that class, a player who has been so good for so long, to suddenly find those runs, even in the field and the odd over as well with the ball, is going to be a big task.

"I know that the CSK squad is deep, they've got a lot of options at the top, but I also believe that as much as the pressure is now on to find that No. 3, it's just probably the most challenging time that I can look for anyway for CSK. And in particular, the leadership of this group -- I think with Dhoni and Stephen Fleming -- it's up to them now to bring the group together, now that they have lost Raina and Harbhajan.

"Couple of options they could go with, the two overseas players at the top and bring in the youngster Gaekwad (Ruturaj) as well or they may decide to have a pinch-hitter. May be even someone like Ravindra Jadeja too, who we have seen in Indian colours, has been so good, so they need to find that No. 3. Personally, I'd put Rayudu in there to take that spot."

CSK were the last team to begin training as the side finally returned to the field last week after their third round of coronavirus tests. The team had a dodgy start to their campaign in the UAE as some members of the camp tested positive for COVID-19 and the entire contingent had to quarantine themselves for longer than expected.

The 13th edition of the league will be played from September 19 to November 10, across three venues in the UAE -- Abu Dhabi, Sharjah, and Dubai.

MS Dhoni Cricket IPL 2020 Scott Styris
Get the latest updates on IPL 2021, IPL Points Table , IPL Schedule 2021 , live score . Like us on Facebook or follow us on Twitter for more sports updates. You can also download the NDTV Cricket app for Android or iOS.