Mumbai Indians defeated Delhi Capitals by 40 runs to avenge a 37-run defeat that they had suffered in the home-leg earlier in IPL 2019. 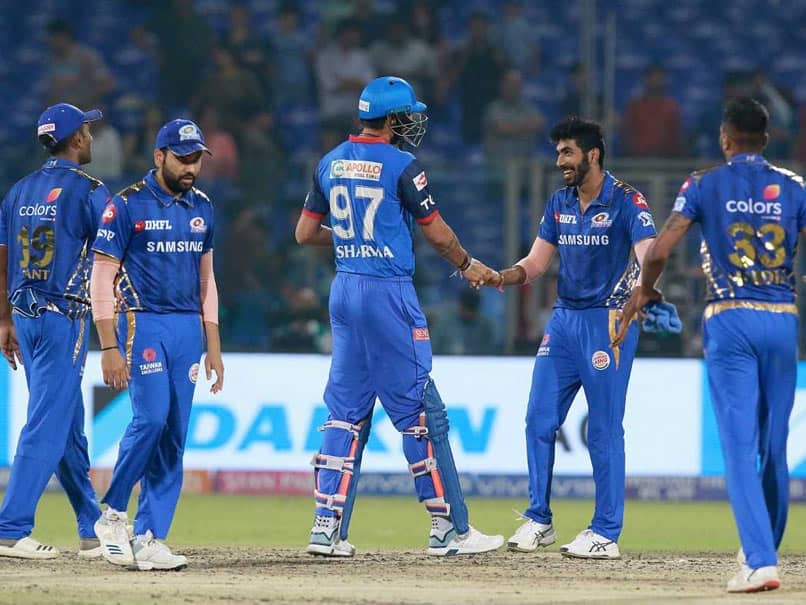 Rahul Chahar claimed three wickets, while Jasprit Bumrah took two wickets as Mumbai Indians defeated Delhi Capitals by 40 runs at Feroz Shah Kotla, Delhi, on Thursday. With this victory, Rohit Sharma and his team avenged a 37-run defeat that they had suffered in the home-leg earlier in IPL 2019. After opting to bat, Mumbai Indians rode on an unbeaten knock of 37 runs by Krunal Pandya to post a competitive 168 for five in 20 overs. The home team managed to score 128 for nine in their allotted 20 overs with Shikhar Dhawan having scored a highest knock of 35 runs.

Earlier, Pandya brothers -- Hardik and Krunal -- led Mumbai Indians' recovery with a 54-run stand. Hardik (32 off 15) and Krunal (37 not out off 26) provided a much needed late onslaught by hammering 51 runs off the last 18 balls to put Mumbai in a strong position.

This was after Delhi spinners Amit Mishra (1/18) and Axar Patel (1/17) tightened the screws on Mumbai with a tidy effort.

On the slow and low surface, Mumbai made a measured start with Rohit's classy cover drive being the only boundary in the first three overs which yielded just 16 runs.

Runs started flowing after that streaky boundary as Quinton de Kock (35 off 27) collected a four and six over deep square leg and by the first powerplay, Mumbai reached a promising 57 for no loss.

It was time to introduce spin and that provided an immediate breakthrough for Delhi as Mishra bowled Rohit with a beauty on his very first ball of the night for his 150th IPL scalp.

Patel was brought in from the other end and he too made instant impact by removing Ben Cutting, leaving Mumbai at 63 for two. Runs were hard to come by with the two spinners in operation, creating scoreboard pressure which led to the run out of a well-set de Kock following a terrible mix up with Suryakumar Yadav (26).

With Mumbai struggling to 117 for four in 17 overs, a late assault was very much needed to put up a fighting total.

And that was provided by the Pandya brothers, with both going after Keemo Paul in the 18th over that leaked 17 runs.

Hardik, who is looking more dangerous with each passing game, whipped Morris for a six before pulling off a helicopter shot off Rabada in the final over.

Jasprit Bumrah Rahul Chahar IPL 2019 Cricket Delhi Capitals vs Mumbai Indians, Match 34
Get the latest updates on IPL 2021, IPL Points Table , IPL Schedule 2021 , live score . Like us on Facebook or follow us on Twitter for more sports updates. You can also download the NDTV Cricket app for Android or iOS.