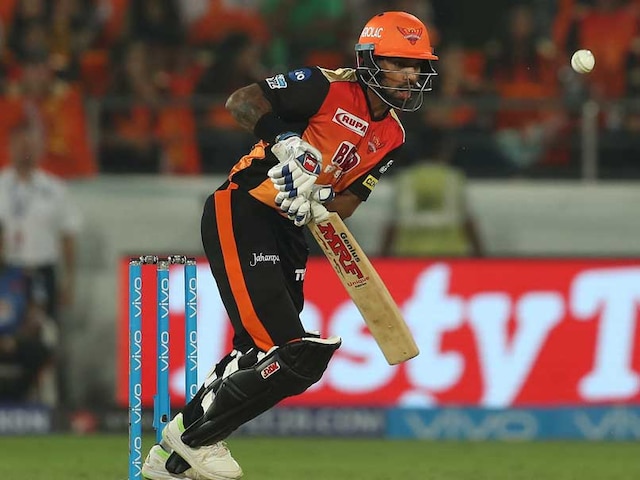 Shikhar Dhawan starred with his unbeaten 77 to guide Sunrisers Hyderabad (SRH) to a 9-wicket win over Rajasthan Royals (R) in the Indian Premier League (IPL) match on Monday at the Rajiv Gandhi International Stadium, Hyderabad. Dhawan was ably supported by skipper Kane Williamson who also remained not out on 36. Chasing a low target of 126 set by Rajasthan, Dhawan made his intentions clear right from the outset. After opener Wriddhiman Saha was dismissed by Jaydev Unadkat in the second over, Dhawan kept the run rate going. Rajasthan skipper Ajinkya Rahane used seven different bowlers to no avail as Dhawan and Williamson chased the target all by themselves in 15.5 overs with 25 balls to spare

Earlier, a stellar bowling display by Sunrisers Hyderabad (SRH) restricted Rajasthan Royals (RR) to 125/9 in their 20 overs. Siddarth Kaul was the pick of the bowlers as he finished with figures of 2/17 in his four overs. Shakib Al Hasan also took two wickets (2/23) while Rashid Khan (1/23), Billy Stanlake (1/29) and Bhuvneshwar Kumar (1/30) shared a wicket each. Sanju Samson batted like a lone ranger for the Rajasthan Royals as he top scored for the visitors with a gritty 49 runs before getting dismissed in the 14th over. Skipper Ajinkya Rahane (13) tried his best but fell prey to a brilliant catch by Rashid. Shreyas Gopal (18) and Rahul Tripathi (17) chipped in with a few knocks in the middle helping their team reach 125. (SCORECARD)

23:07 IST: Thank you for staying with us with the live updates. We will return tomorrow with the live blog updates of the fifth IPL match between Chennai Super Kings and Kolkata Knight Riders.

23:01 IST: And its over. Sunrisers Hyderabad thrash Rajasthan Royals by 9 wickets to win their opening IPL 2018 match.

23:00 IST: SRH need 6 runs in 6 balls. They are almost there. Classy batting display by Dhawan and Williamson.

22:48 IST: This partnership has been fabulous. The communication between these two has been on point. A good understanding between them. SRH need 29 more runs in 51 balls

22:21 IST: FOUR! Races behind point. Sweet shot by Williamson. Both Dhawan and Williamson are in the offensive mood. SRH 57/1 in 6 overs

22:20 IST: FOUR! Ball wins the race. Another boundary for Dhawan.

22:18 IST: FREE HIT! First of the match. Ben Laughlin unlucky to have been at the receiving end of that decision. No run whatsoever.

22:14 IST: FOUR! Krishnappa Gowtham gets welcomed with a four. Dhawan is getting himself rolling.

22:04 IST: FOUR! Dhawan hammers the ball towards the boundary. Thrashes it to the mid off region for a four. SRH 17/1

22:01 IST: WICKET! Sunrisers Hyderabad lose their first wicket as Wriddhiman Saha departs vs Rajasthan Royals. Poor shot by Saha. Good first over for Unadkat. Saha tried to take on the bowler and gets foxed by the delivery. SRH 6/1 in 1.3 overs

22:00 IST: WIDE! That was some unreal bounce from the pitch.

21:58 IST: FOUR! Saha special. Jaydev Unadkat gets his welcome with a four. A good shot over mid on boundary. SRH 5/0

21:58 IST: DROPPED! Dhawan survives as his catch is dropped by skipper Ajinkya Rahane at the slips. A good first over by Rajasthan. SRH 1/0 in 1 over

21:55 IST: Saha off the mark with a single. Rajasthan need early wickets if they want to stay in this game. SRH have a formidable batting line up.

21:53 IST: SRH openers Shikhar Dhawan, Wriddhiman Saha are out in the middle. Dhawal Kulkarni begins the proceeding with the ball for Rajasthan.

Rajasthan Royals never got going apart from that 46 run partnership between Samson and Rahane. Like Dhoni spoke after the first match, they will be thinking if not winning, at least the quantum of loss shouldn't be much to affect net run rate adversely. #SRHvRR

21:30 IST: Bhuvi has been economical just like the other SRH bowlers. The hosts have been terrific with the ball. They have done extremely well in restricting the batting side to a low total.

21:25 IST: OUT! Rajasthan Royals lose their seventh wicket as Jos Buttler departs for 6 vs Sunrisers Hyderabad. Rashid Khan clean bowls the English batsman. Gets his first wicket of the night. RR 115/7 in 17.2 overs

21:20 IST: FOUR! Shreyas Gopal scores a good-looking shot. Ball races from the bat towards the mid off boundary. RR 112/6

21:17 IST: Just when Rajasthan look like they're settling in, they lose a wicket. Credit to the SRH bowlers.

21:10 IST: OUT! Rajasthan Royals lose their sixth wicket as Krishnappa Gowtham departs for a duck vs Sunrisers Hyderabad. RR 96/6 in 14.4 overs

21:08 IST: Jos Buttler and Krishnappa Gowtham are the two new batsmen on the crease for Rajasthan.

21:04 IST: OUT! Sanju Samson departs after a valiant 49. Misses out on his fifty. RR lose their fifth wicket.

21:03 IST: OUT! Rajasthan Royals lose their fourth wicket as Rahul Tripathi departs for 17 runs vs Sunrisers Hyderabad. RR 92/4 in 13.2 overs

21:00 IST: DROPPED! Falls short by a metre. Stanlake tries his best but drops it. Tripathi gets a lifeline. RR 92/3

21:00 IST: Sanju Samson appears to be the lone ranger for Rajasthan. He has scored the bulk of runs for the batting side. RR 90/3

20:54 IST: FOUR! Lovely stroke play by Rahul Tripathi. 1st boundary after 27 balls. Back-to-back now. Tripathi is turning it on for the Rajasthan side. They need these runs. Good over for Rajasthan. RR 87/3 in 12 overs

20:53 IST: Rashid Khan bowls his second over. Samson has now reached to 46 runs. A partnership is needed here.

20:46 IST: Sanju Samson has to bat now. One more wicket Rajasthan lose, they will be in deep trouble.

20:44 IST: Shakib is back into the bowling attack.

20:42 IST: OUT! Rajasthan Royals lose their third wicket as Ben Stokes departs for 5 runs vs Sunrisers Hyderabad. Kane Williamson takes a superb catch. First run-out and now a brilliant catch, he is having a great day as a skipper on the field. RR 63/3 in 9 overs

20:38 IST: Stanlake back into the attack for the Sunrisers. Slip in place for him.

20:32 IST: OUT! Rajasthan Royals lose their second wicket as Ajinkya Rahane departs for 13 vs Sunrisers Hyderabad. A good catch by Rashid Khan. RR 52/2 in 6.5 overs

20:26 IST: Siddarth Kaul comes into the attack for SRH.

20:19 IST: FOUR! Width and bounce. Hammered towards the on side boundary by Rahane.

20:15 IST: Shakib Al Hasan bowls the fourth over for SRH.

20:12 IST: FOUR! Good shot. Races towards the mid on region for a four. Samson looks in good nick.

20:11 IST: FOUR! Superb shot by Samson. Punched it towards the off side.

20:10 IST: Panic batting by Samson. tries to slice it over the keeper, misses it completely.

20:08 IST: Billy Stanlake bowls the 2nd over for Sunrisers. Sanju Samson comes in at number 3 for Rajasthan.

20:06 IST: OUT! Rajasthan Royals lose their first wicket as D Arcy Short departs for 4 vs Sunrisers Hyderabad. No need for a run there but Short thought otherwise. Kane Williamson with a direct throw and ran himself out. RR 6/1 in 1 over

20:04 IST: FOUR! Short opens his account with a boundary. A good shot towards the leg side boundary.

20:00 IST: Rajasthan Royals openers Ajinkya Rahane and D'Arcy Short are out in the middle. Bhuvneshwar Kumar begin proceedings with the ball for Sunrisers Hyderabad

19:08 IST: Hello and welcome to the live match updates of the fourth match between Sunrisers Hyderabad and Rajasthan Royals of the Indian Premier League (IPL).

While Sunrisers were able to retain a majority of their players at the auction, Royals spent big bucks on Ben Stokes (Rs 12.5 crore) and Jaydev Unadkat (Rs 11.5 crore) who were their costliest buys this season. The pair would have to shoulder a lot of responsibility especially after the Jaipur-based franchise spent a lot on the pair. Hyderabad will be expecting fireworks from India and England openers Shikhar Dhawan and Alex Hales, drafted in as a replacement to Warner, to deliver the goods at the top.