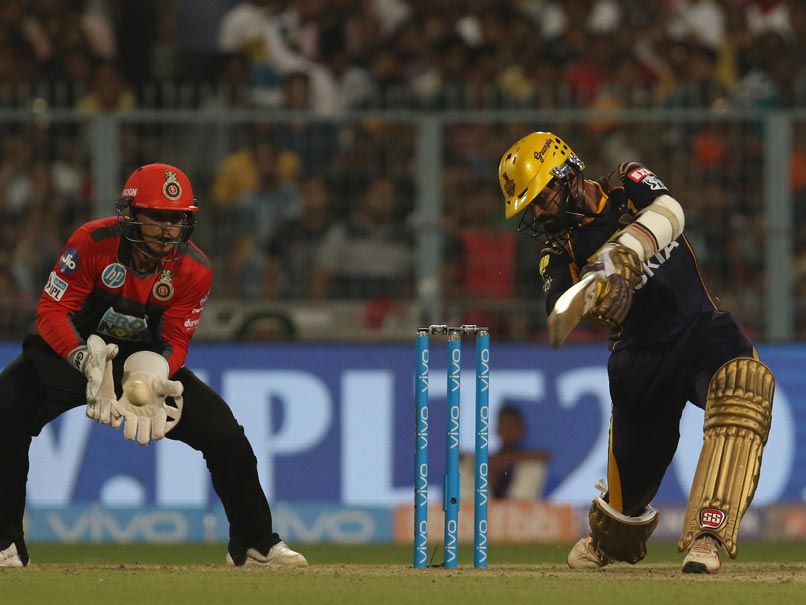 Kolkata Knight Riders (KKR) rode on Nitish Rana's all-round show and Sunil Narine's whirlwind 19-ball 50 to beat Royal Challengers Bangalore (RCB) by four wickets in the Indian Premier League (IPL)clash on Sunday. In front of a packed Eden Gardens and co-owner Shah Rukh Khan, part-time off-spinner Rana (2/11) picked up the big wickets of AB de Villiers and skipper Virat Kohli in successive deliveries to reduce the visitors to 127/4 in 14.3 overs. Later, Mandeep Singh's 18-ball 37 helped RCB to a challenging 176/7, but mystery spinner Narine -- used effectively as a destructive opener by KKR since last season -- made light of the target with a fiery 19-ball 50 (4x4, 5x6) along with Rana who scored a vital 25-ball 34 to steer the hosts over the line with seven balls to spare. SCORECARD)

23:38 IST: It's all over. Kolkata Knight Riders beat Royal Challengers Bangalore by 4 wickets.

23:09 IST: The 50-run partnership between Nitish Rana and Dinesh Karthik was up and Rana fell at a crucial stage. He missed the attempt to sweep and that was almost plumb.

22:34 IST: Wicket number 2 for Umesh Yadav. Short and wide, the ball was moving away, Uthappa looked to swat the ball over midwicket played a wrong shot.

22:27 IST:The man, who dismissed Virat Kohli and AB de Villiers on consecutive deliveries is now doing it with the bat for KKR.

22:20 IST: Sunil Narine beaten by the pace. Gave a thick inside edge into off stump.

Sunil Narine is the only player with two fifties off 17 balls or less in IPL.

21:57 IST: Chris Woakes strikes in his first over. A short, wide delivery outside off miscued by Lynn over mid-off where superman De Villiers took a splendid catch.

21:53 IST: Sunil Narine started with a FOUR and SIX off Chahal

21:50 IST:Sunil Narine and Chris Lynn begin the chase for KKR and Yuzvendra Chahal opens the attack for RCB.

21:35 IST: Much-needed runs for RCB as Mandeep Singh hits Vinay Kumar for SIX, FOUR, SIX before departing on 37 off 18.

21:24 IST:Full outside off from Johnson and Sarfraz mistimed a lofted drive down to the long-on.

20:47 IST: Looks like Virat Kohli and AB de Villiers have decided to change the tempo of their innings after the halfway mark. 14 runs off Sunil Narine's over.

20:44 IST:Virat Kohli is finding it extremely difficult to rotate the strike that is why AB de Villiers is now dealing in SIXES.

20:38 IST: This one from Sunil Narine came slower than McCullum expected and the Kiwi was out bowled.

20:34 IST: This time the slower ball whacked by McCullum over the wide mid-off for a FOUR.

20:33 IST: Brendon McCullum got a full, outside off delivery from Mitchell Starc and he smoked it for a FOUR.

20:22 IST: Brendon McCullum survives a stumping off Kuldeep Yadav as 10 runs came in the over.

20:19 IST: Another excellent over for KKR from Piyush Chawla, just six runs came off it.

20:14 IST: Good first over for Kuldeep Yadav against the two most destructive batsmen in the world, just 7 came off it

20:10 IST:Soft dismissal and Piyush Chawla strikes in his first over. De Kock was attempting a reverse sweep and completely mistimed it. Got a top edge and the ball flew to short third man.

19:20 IST: Hello and welcome to the live match updates of the second match of the day between KKR and RCB at the Eden Gardens.

Just like previous editions, two-time champions KKR will kick off their IPL 2018 campaign as one of the favourites. Gautam Gambhir, who will be playing for Delhi Daredevils this season, had led KKR to title victories twice in his seven-year stint with the purple camp -- 2012 and 2014. Karthik will have a tough job and will be determined to keep KKR's domination intact like their slogan, 'Korbo Lorbo Jeetbo Rey'.