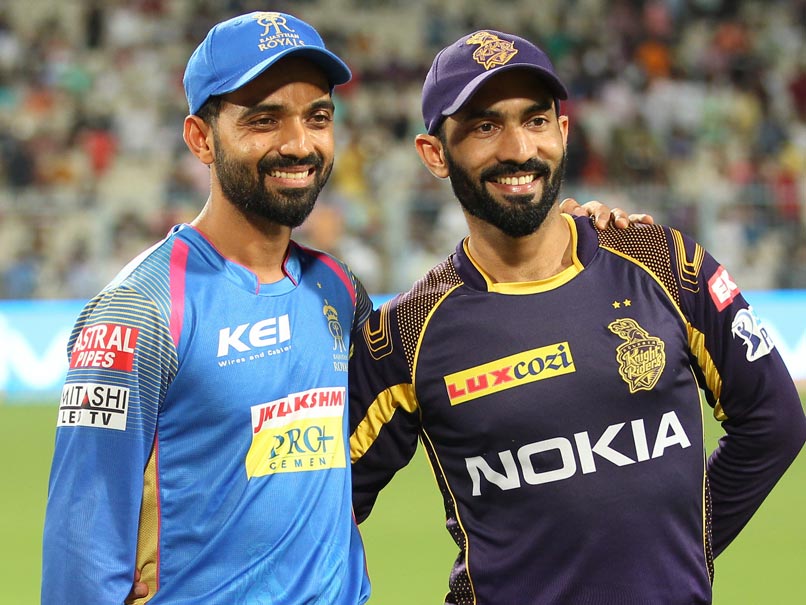 Kolkata Knight Riders (KKR) produced a bowling masterclass as they beat Rajasthan Royals (RR) in their Indian Premier League (IPL) Eliminator clash on Wednesday at the Eden Gardens. With the loss, Rajasthan have been eliminated from this tournament while Kolkata will play SunRisers Hyderabad on Friday in Qualifier 2. Chasing 170, Rajasthan looked steady as their batsmen Ajinkya Rahane (46), Rahul Tripathi (20) and Sanju Samson (50) contributed well during the innings. However, things turned in Kolkata's favour after Piyush Chawla (2/24) took Samson and Tripathi's wicket to peg back the chasing side. Rajasthan crumbled under pressure from the Kolkata bowlers in the latter stages of the match and eventually lost to the better team. (SCORECARD)

Dinesh Karthik (52) and Andre Russell (49) took Kolkata Knight Riders to 169/7 against Rajasthan Royals in the Indian Premier League (IPL) Eliminator match on Wednesday. KKR were in deep trouble after losing their top four batsmen for 51 runs in 8 overs. Sunil Narine (4), Chris Lynn (18), Robin Uthappa (3) and Nitish Rana (3) failed to accumulate runs for their team. However, Karthik and Russell ensured KKR got to a competitive total. Krishnappa Gowtham (2/15) was once again brilliant with the ball for Rajasthan. Jofra Archer and Ben Laughlin also took two wickets each.

22:45 IST: Thank you for staying with us for the live match updates.

22:27 IST:This match seems to be getting out of Rajasthan's hands. Superb bowling by Russell. Rajasthan Royals need 34 runs in 6 balls

22:13 IST: FOUR!Full toss and Samson hammers the quicker delivery over the off side for a four.3rd IPL fifty for Sanju Samson. A superb inning by him. RR 125/2 in 16.3 overs

22:12 IST: Piyush Chawla is back into the bowling attack for KKR.

22:10 IST: FOUR!Scooped and a reverse sweep over the two men behind point. Super shot by Klaasen. He can be dangerous for KKR. narine has been expensive tonight. Narine is done 0/39 runs in 4 overs. RR 119/2 in 16 overs

22:09 IST:Narine is turning the ball really well. Match is in balance now. After Rahane's dismissal, KKR have taken control.

21:58 IST: Four dot balls and pressure on Samson. Good over until now by Narine.

21:56 IST: Narine is back into the bowling attack.

21:55 IST:Kicks off the deck a bit as Russell bangs it in a little short, on the body. Rahane works it through mid-wicket and runs the first one hard. As a result, is able to come back for the second. Two runs. Good running has been the hallmark of this partnership. RR 103/1 in 13 overs

21:52 IST: Andre Russellis brought back into the bowling attack for Kolkata.

21:49 IST:Samson, Rahane have steadied Rajasthan's ship now. These two are looking solid in the middle and their partnership is key to Rajasthan's success in this match. RR 94/1 in 11.4 overs

21:46 IST:KKR desperately need a wicket now. Rajasthan are cruising towards a win now.RR 90/1 in 11 overs

21:26 IST:A good first over for Kuldeep. KKR needed a wicket badly and they got Tripathi's. They will have to get the danger man Rahane out. Just 3 runs off it. KKR 54/1 in 7 overs

21:12 IST:A big inside edge spotted! Bad review by Kolkata. Narine flicks it on a length around middle, it straightens a bit after landing as Tripathi tries to work across the line. He seems to have missed it to get hit on the back pad. They put in an unsuccessful appeal. Karthik and Narine have a chat and go for the referral. The replays detects a big edge. RR 47/0 in 5 overs

20:58 IST: SIX!Pace on the ball and Rahene punishes it. He does it so well. Uses the pace of the ball and gets himself a maximum over the back foot point area. Good positive beginning from him. RR 9/0 in 1 over

20:56 IST:Thick edge. Rahane survives.Wanted to play in the leg but gets a leading edge taking it to the onside.RR 2/0 in 0.1 over

20:54 IST: Rahul Tripathi, Ajinkya Rahane open the batting for Rajasthan. Andre Russellbegins the proceedings with the ball for Kolkata.

20:39 IST: FOUR!That's going to be four. He is now on 48. In field moved in but Russell gets his boundary at the long on boundary.

20:35 IST:Back-to-back wides for Laughlin, pressure on the bowler.

20:28 IST: SIX!Another wrong one and Russell hammers it towards the leg side for a huge six. The ball takes the top edge and sails over deep backward square fence. 14 runs and a wicket off this one. KKR 149/6 in 18 overs

20:25 IST: SIX!Russell swings away his bat and the ball still crosses the boundary despite lack of timing. KKR 142/6 in 17.3 overs

20:24 IST: OUT!Karthik departs for 52 runs. Ajinkya Rahane takes a lovely catch going back behind covers. Excellent innings comes to an end. One captain dismisses the other. KKR 135/6 in 17.1 overs

20:03 IST: SIX! 826th of the tournament. Shubman hits a fearless shot. The fielder at long off can only see the ball sail over him.

19:55 IST:Edgy run again. Karthik looks to work it away to the onside but gets it off the leading edge towards backward point for one. KKR 74/4 in 11.2 overs

19:51 IST: FOUR!Ben Laughlin gets punished with a four off his first ball. A deft touch by Karthik sees the ball go fine for a boundary.KKR 65/4 in 10.1 overs

19:50 IST:Gopal bowls for RR after the timeout. Rajasthan have been teriffic with the ball. Seven runs off the over. KKR 63/4 in 10 overs

19:45 IST:Ish Sodhi again impresses with the ball. 5 runs off it. Time for the strategic time out. KKR will have to rethink about their batting strategy. KKR 56/4 in 9 overs

19:34 IST:A bit of turn here. Karthik pushes it with that to covers. The man there dives and stops that. Good cricket all around. A very good start for Sodhi. Only two runs off it. KKR 48/3 in 7 overs

19:32 IST:Ish Sodhi is the bowler for Rajasthan.

19:30 IST:A good over for Kolkata after initial hiccups. Karthik played two superb looking shots. The powerplay comes to an end. This is the over KKR were searching for. Lynn gets his boundary this over too. Three boundaries in the over. This is poor bowling. You can't be giving batsmen room outside off stump. KKR 46/3 in 6 overs

19:27 IST: FOUR!Jaydev Unadkat gets welcomed with a boundary by Karthik. A fuller length and Karthik gets onto the front foot to drive over the cover fielder for a four. Back-to-back boundaries for Karthik. Poor bowling by Unadkat. KKR 40/3 in 5.3 overs

19:22 IST: FOUR!Impeccable timing by Karthik. Pulls it over the mid off region for a boundary. Great stuff by the KKR skipper. KKR 28/3 in 4 overs

19:20 IST: OUT! Nitish Rana departs for 3 runs. This is too easy for RR.Rana mishits completely and an easy catch for Jaydev Unadkat. Archer serves a length ball on the stumps, Nitish yet again looks to back away and hit it. Is deceived by the lack of pace and gets it off the inner half. Unadkat at mid on takes a couple of steps forward and takes it with ease.KKR are in deep trouble now. KKR 24/3 in 3.4 overs

19:19 IST:Two runs for Rana. Cut towards the mid off region.

19:17 IST: FOUR! Lynn hammered on the offside. Bottom hand comes into play. A good shot. A much-needed boundary for KKR. That was a beautiful stroke.Nobody stood a chance of cutting that off. KKR 22/2 in 3 overs

19:14 IST: OUT! Gowtham strikes again. Uthappa gets a leading edge and the bowler catches it easily. Uthappa departs for 3 runs. KKR 17/2 in 2.1 overs

19:10 IST:Extra bounce by Archer. Hurled on a length around off, it bounces more and hits high on the bat. Goes straight to backward point. No run for Uthappa. KKR 17/2 in 2.1 overs

19:07 IST: Jofra Archer bowls the 2nd over. Lynn hits it straight to mid on. Thankfully there is no pace on the shot. Lynn survives as the ball doesn't reach the fielder.

19:01 IST: FOUR!Flatter outside off on a shorter length, Sunil stays back and smashes it through covers for a boundary. Whatta start for Narine and KKR.

18:25 IST:RR have lost their last six IPL games at the Eden Gardens with their only win here coming in 2008

18:00 IST: TRIVIA!Sunil Narine needs two more wickets to take 50 IPL wickets at Eden Gardens. Lasith Malinga. at Wankhede Stadium, is the only other to achieve such a feat.

17:30 IST: Hello and welcome to the live match updates of Kolkata Knight Riders and Rajasthan Royals.

Minus their two top English star performers -- Jos Buttler and Ben Stokes who were called for national duty -- Rajasthan were written off by many, but they managed to beat Royal Challengers Bangalore in their final league game on May 19 to keep their slender hopes alive. The win, however, was still not enough as they needed two results to go in their favour to qualify for the playoffs and eventually it went their way. (Play Fantasy cricket and win cash daily)

Comments
Topics mentioned in this article
Kolkata Knight Riders Rajasthan Royals Live Score Live Cricket Score Live Blogs Dinesh Karthik Ajinkya Rahane Indian Premier League 2018 Cricket
Get the latest updates on ICC T20 Worldcup 2022, check out the Schedule and Live Score. Like us on Facebook or follow us on Twitter for more sports updates. You can also download the NDTV Cricket app for Android or iOS.